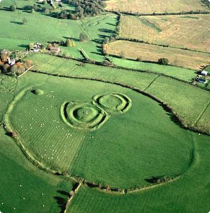 Earthworks are monuments of various shapes and sizes made simply by piling up earth, starting in the Stone Age with the banks of rare rounded enclosures such as the imposing Giant's Ring at Ballynahatty near Belfast, which has a small megalith near its centre, or the so-called causewayed camps at the Antrim sites of Lyles Hill and Donegore. Much more common are the U-shaped 'burnt mounds' or fulachta fiadha, in which water heated with hot stones was probably used for cooking, but possibly also for personal washing - or both. Widespread, too, are round mounds, or barrows, used for burials, of which a number of examples are known on the Hill of Tara.

Tara has a rare example of a cursus, which is the ceremonial end to a road with earthen banks on either side and to which the medieval chroniclers of Tara gave the romantic name of 'The Banqueting Hall'. The hill-top itself is within the so-called 'Royal Enclosure' consisting of an incomplete oval ditch inside a bank, which suggests more a ritual than a defensive purpose. Not far away is Rath Medhbh, a roughly circular enclosure, but more war-like because the ditch is outside the bank. This is the more usual configuration in the hill-forts found around Ireland, as at Mooghaun, Co. Clare, which - at over 27 acres - is probably the largest in the country. These earthen forts may date from the Late Bronze Age, around 700 B.C., or from the Iron Age which followed it.

Tara is only one of a number of important royal sites in Ireland that have mythological links with echoes going back to before the dawn of the country's history. One of these is Emhain Macha, Navan Fort, where a remarkable wooden structure 40m across, and consisting of half a dozen concentric circles of posts with a taller one at the centre, was built around 100 B.C. - only to be ritually set on fire some decades later.

Of roughly the same date are long earthworks snaking across the borders of South Ulster, and known variously as the Dorsey, the Dane's Cast, or the Black Pig's Dyke. They may possibly have been erected to protect the province against invasion from the south - epitomised by the army of Queen Medhbh, whose royal seat was at Rathcroghan on the plains of Roscommon, where there is a large mound which is said to mark the area where she had her 'palace'. Another important royal site was Knockaulin or Dún Ailinne in Kildare (not regularly accessible), where excavations suggested the former presence there of a kind of wooden amphitheatre within a large, circular earthen hill-top fort.