Many townlands of the new parish of Riverchapel-Courtown Harbour host fascinating heritage sites, such as St. Adian's cross, an Anglo-Norman earthen motte and bailey, a ringfort as well as many early church sites. These heritage sites can be found in Ballintray Lower, Ballylusk, Ballinakill, Kiltennel, Killenagh, the medieval parish of Ardamine (Middletown), and Seafield. 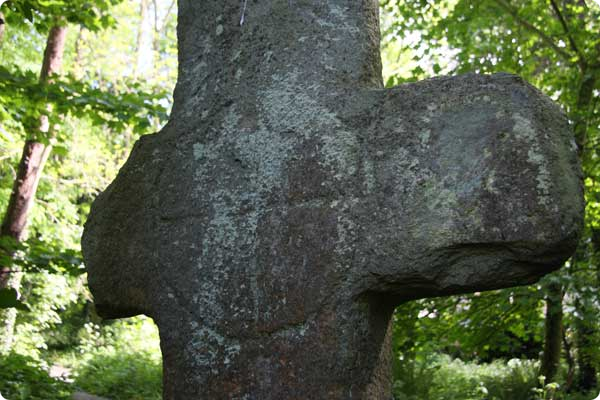 Ballintray Lower:
Granite cross: This cross is over 2.5m. high and has an unpierced cross-in circle design. It is possibly of Early Christian date and marks an ancient parish boundary.

Ballintray Bridge: This bridge is part of the main Gorey-Courtown Road, crossing a deep gorge cut by the Owenavorragh river. It was constructed in 1847 (Kinsella 1982: 48).

Ballinakill:
Ringfort: The site of an early medieval subcircular ringfort (49 x 45m.) which is defined by field fence and outer fosse (Moore 1996: 29).

Kiltennel:
Early medieval church site: The site is situated within D-shaped graveyard and surrounded by earthen bank. It was dedicated to St Sinell, whose feast day is on 15 June (Culleton E 1999: 211).

Medieval church: The North and south walls of medieval church made from mortared shale are also located at Kiltennel. The ruins are 2m. in height (Moore 1996: 133).

Church of Ireland church: This neo-Gothic style building is made from roughcut sandstone and granite dressings, which was taken from an earlier church that had been built at Seafield around 1609. This Church of Ireland was built by the Lord Courtown in the 1770s as a memorial to the Stopford family. A new aisle was added to the south side in 1880 (Kinsella 1982: 98).

Photograph of the back of Ardamine Church

Ardamine Church of Ireland church, dedicated to St John the Evangelist, was built in 1862 as a memorial to the Richards family.

A rough plain Latin cross, less than one metre high, marking the southern boundary of Ardamine parish, may date to the 12th century, Ranson 102. Moore states it is probably 17th century, 133. It has always been known as St Aidan’s cross.

Ruin of wall at graveyard in Seafield

Falling wall near the D-shaped graveyard in Seafield.

Middletown (Ardamine):
Medieval church site: This is the site of a rectangular medieval parish church. It was dedicated to St Aidan, the first bishop of Ferns, who is said to have landed here from Wales in the early 600s. He is reputed to have built his first church in this area (Culleton E. 1999: 20).

Motte and bailey: Middletown is also the site of a 12th century Anglo-Norman earthen motte and bailey. It was built by the Barry family, and was their earliest type of defensive structure. The motte reaches 8m. in height and 6m. wide across the top (Culleton B. 1994: 55 & Colfer 2002: 62). Some evidence suggests that this motte was built over a much earlier burial mound.

Latin Cross: The southern boundary of Ardamine parish was marked by this plain, rough Latin cross. It is less than one metre high. There is some debate over the date of the cross. Ranson states that it may date to the 12th century (Ranson 1948: 102), while Moore believes it probably dates to the 17th century (Moore 1996: 133). The cross has always been known as St Aidan’s cross.

Church of Ireland church: Ardamine Church of Ireland church is built of local limestone with Knockavoca stone dressings. It is dedicated to St John the Evangelist and was built in 1862 as a memorial to the Richards family. From 1892 untill 1967 the National School served the Protestant population (Kinsella 1982: 99).

Memorial: Middletown is the site of a memorial to Sean Etchingham, T.D. who died in 1923. It was unveiled by Eamon de Valera, in 1948.