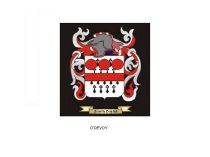 It is believed that the O'Devoy (O'Deevy) sept originated in the barony of Maryborough (Portlaoise), and when surnames came into existence it took that of Ó Duibh, which over time became a well-known Laois name of Devoy or Deevy.

It is believed that the O'Devoy (O'Deevy) sept originated in the barony of Maryborough (Portlaoise), and when surnames came into existence it took that of Ó Duibh, which over time became a well-known Laois name of Devoy or Deevy.

The name Devoy is very well-known on account of the famous Fenian John Devoy (1842-1928), and it is surprising to find it so rare that in none of the years for which we have detailed statistics was there more than a combined total of 19 birth regis­trations for Devoy and its variant Deevy.

Judging by up-to-date directories and voters' lists, this low figure would appear to be somewhat misleading. The O'Devoys or O'Deevys were one of the "Seven Septs of Laois," the chief men of which were transplanted to Co. Kerry in 1609.

This transplantation had little success with any of these septs, and least of all with the O'Devoys since that name is not located in Co. Kerry now, nor was it in 1659. It has always been associated with Laois and adjoin­ing midland counties. As regards the Gaelic form of the name, O'Donovan places the sept from time immemorial in the barony of Maryborough (Portlaoise) and says that when sur­names came into existence it took that of Ó Duibh which, he says, in due course became the well-known Laois name of Deevy or Devoy. This is supported by an entry in the Annals of the Four Masters (1071) where the lord of Creamhthainn (i.e. Maryborough) is called Ó Duibh. Woulfe, however, gives Ó Dubhuidhe as the Irish form: the early anglicisations, written down phonetically from the spoken Gaelic, support this: O'Dyvoy, O'Dyvoie, O'Dywy, O'Dewy, O'Devy, O'Divie are some of these; all of Laoismen in the 16th century.

A later example of the equation of Devoy with these other forms is afforded by the Ossory will of Edmund Divey, "alias Devoy," of Smithstown (1681). On the other hand, Woulfe's state­ment that Ó Dubhuidhe is a form of Ó Dubhuidhir (O'Dwyer) can hardly be admitted in the absence of the evidence for it. With Duff being practically unknown in Co. Laois, where Deevey and Devoy do exist, O'Donovan's opinion must be accepted, with the qualifi­cation that Ó Duibhidhe or Ó Dubhuidhe was the sur­name adopted, or possibly that Ó Duibh in the course of time became Ó Duibhidhe.