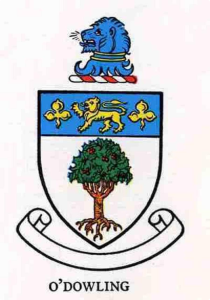 As one of the Seven Septs of Laois, the leading members of the O'Dowlings were transplanted to Tarbert on the border of north Kerry and west Limerick in 1609.

As one of the Seven Septs of Laois, the leading members of the O'Dowlings were transplanted to Tarbert on the border of north Kerry and west Limerick in 1609.

The Dowlings are one of the "Seven Septs of Laois", the leading members of which were transplanted to Tarbert on the border of north Kerry and west Limerick in 1609. This transplantation did not affect the rank and file of the sept who multiplied in their original territory: this lay along the western bank of the River Barrow, anciently called Fearann ua n-Dunlaing i.e. O'Dowling's country.

Thence they spread eastwards through Counties Carlow and Kilkenny (where they are most numerous today) and even as far as Co. Wicklow - there are no less than four townlands called Ballydowling in the Rathdrum area of Co. Wicklow.

The transplantation to Kerry had little permanent effect as regards numbers. Nevertheless, two or three of the many Dowlings of distinction, nearly all of whom were connected with literary activities in some form, were Kerrymen: viz. Bartholomew Dowling (1823-1863), author of The Brigade of Fontenoy and his brother William Dowling, a poet identified with America rather than with his own country, and Most Rev. Austin Dowling (1868-1930), Archbishop of St. Paul's, U.S.A., was of a family which emigrated from Co. Kerry or Co. Limerick.

All the others were natives of Laois or one of the adjoining counties. Among these we may mention Vincent Dowling (1787-1844), colonial judge and author of legal treatises, and Vincent George Dowling (1785-1852), founder, and editor for nearly thirty years, of Bell's Life and also of Fistiana, publications which were carried on in turn by his son, Frank Lewis Dowling (1821-1867). Richard Dowling (1846-1898), novelist and editor of the Dublin humorous journals Zozimus and Ireland's Eye, was also a Laoisman, as was Dr. Jeremiah Dowling (1830-1906), author of The Claddagh Boatman; and, to go back some three centuries, there was Thady Dowling (1544-1628), annalist and Irish language grammarian.