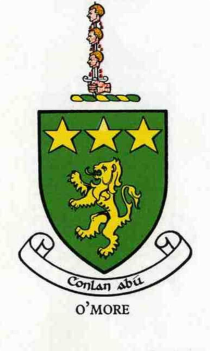 The old Irish O'Moores are Ó Mordha, from the word mordha (stately, noble). The ancestor Mordha was twenty-first in descent from Conal Cearnach, who was the most distinguished of the heroes of the Red Branch.

The old Irish O'Moores are Ó Mordha, from the word mordha (stately, noble). The ancestor Mordha was twenty-first in descent from Conal Cearnach, who was the most distinguished of the heroes of the Red Branch.

Moore is a very numerous name in Ireland. With some 16,500 of the population so called, it holds twentieth place in the list of commonest names. The great majority of these (apart from the metropolitan area) are in Munster and Ulster. It is practically impossible to say what proportion of these are of Gaelic Irish origin and what pro­portion of English extraction, for Moore is also indigenous in England and very com­mon there (it has thirty-ninth place in their list). It would perhaps be better to say Anglo-Norman rather than English, since Anglo-Norman Moores established themselves in Munster soon after the invasion. These Moores are called de Mora in Irish, a phonetic rendering of the English name which is derived from the word 'moor' (heathy mountain).

The old Irish Moores are Ó Mordha, from the word mordha (stately, noble). The eponymous ancestor Mordha was twenty-first in descent from Conal Cearnach, the most distinguished of the heroes of the Red Branch.

The O'Mores were the leading sept of the Seven Septs of Laois; the other six being tributary to them. According to Keating, the O'Mores have St. Fintan as their protector. Of thirteen families of Moore recorded in Burke's Landed Gentry of Ireland (1912), twelve claim to have come to Ireland as settlers from England or Scotland and only one to be an offshoot of the O'Mores. Judged by the test of their resistance to English aggression, the O'Mores may be described as one of the foremost Irish septs. In this connection particular mention may be made of Rory O'More (died 1557) and his son, Rory Óg O'More (died 1578), both of whom were distinguished Irish leaders in the wars against the Tudor sovereigns, and another Rory O'More, a member of the Laois sept, the head of the 1641 Rising and a staunch ally of Owen Roe O'Neill in the subsequent war. It is of interest to note that he was known in English as Moore as well as O'More.

Of the many Moores who have distinguished themselves in various phases of Irish life the most famous was, perhaps, Thomas Moore (1779-1852), the poet: he was of a Co. Wexford family. The Moores of Moore Hall, Co. Mayo, produced George Henry Moore (1810-1870), the politician, and his two sons George Moore (1852-1933), the novelist, and Col. Maurice Moore (1854-1939), author and ardent worker in the Nationalist cause in the last century. The Moores of Moore Hall descend from the Moores of Alicante, Spain, who were English in origin. Father Florence O'More, alias Moore (1550-1616) was a noted Irish Jesuit in Austria. Rev. Michael Moore (1640-1726) was the only Catholic provost of Trinity College (Dublin Uni­versity). Others were noted as economists, architects etc., and one Rev. Henry Moore (1751-1844) was friend and biographer of John Wesley. A number of O'Mores of the Laois sept were officers of the Irish Brigade in France in the eighteenth century. The descendants of one of them, Murtagh O'More (who went to France in 1691), ranked among the nobility of France as Lords of Valmont.

The family name of the Earls of Drogheda is Moore: their ancestor came to Ireland under Queen Elizabeth I. The Moores of Barmeath have been settled there since the fourteenth century. St. Malachy, who was Archbishop of Armagh from 1132 to 1148, is described by Gams and other ecclesiastical authorities as Malachy O'Moore. His surname, how­ever, was O'Morgair (now obsolete), which is not, in fact, an early form of Ó Mordha.

Previous - O'Lalor
Back to