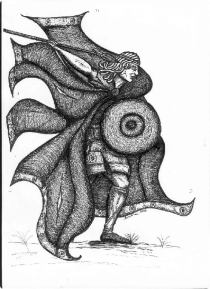 Gßrach's three sons were Lon the blackbird, Ualu the prideful, and Diliu the torrent, and they took up a position at a ford that now bears their name, ┴th mac Gßrach. Along with their charioteers they were hoping to confront and slay C·chulainn and raise the torment from Medb's army. Six shafts of aspen were cut as spears for the charioteers so that they could all attack simultaneously. This was against the fair rules of combat but they believed it was for the greater good. They waited, and eventually that C·chulainn passed through the ford. The six attacked together like a swarm of wasps against a bear, and the six died, their bodies left by the river's edge.

C·chulainn made a pledge now that whenever he caught sight of either Ailill or Medb that he would let fly at them a stone from his sling. He lay in wait in the trees by the ford, and the host arrived and discovered the three dead warriors and the three charioteers Meslir, Meslaech and Meslethan. In rage and grief, Medb came down to the reed-strewn bank of the ford, her pet squirrel fretfully leaping around her shoulders. C·chulainn let loose a shot south across the river and it struck the squirrel as it sat nestled into her neck. To this day that area of the river's edge is called Mķthe Tog, Squirrel Neck. Further up the river as it turned away to the east Ailill had been with his guard and a stone took the head off his pet bird, which also had been perched close to his neck, and that place of ground is now called ┴th Mķthe nEuin, the Bird Neck Ford. This is open to dispute, however, as some say that both creatures were perched on Medb's shoulders when their heads were torn off. At this same time Reuin was drowned in a lake now called after him, but that is another story.

Anyway, with the bodies of the men at the bank and the sudden death of the two animals, the army took shelter wherever they could find it, flattening on the ground behind bushes and trees and stones. And so they stayed until Ailill recovered somewhat and shouted for his men to rise from their cowardly concealment.

'Find him! He cannot be far off!' he ordered his son Maine, who selected a group of men near him to rise and start exploring the area. One caught a fleeting glimpse of C·chulainn, however, and promptly dropped to the ground again, which prompted the others to do likewise in a sudden panic. When they recovered from their fright one of the braver men raised his head from the tall grass, and his head shattered in a spray of bone and brain.

'You brave men!' called out the jester Maenķn. 'I heard your boastful declarations last night. If I were you I would have taken his head by now!' But his head flew from his shoulders as another stone winged from C·chulainn's sling.

'From now on I'll cut in two any who makes a joke of that youth. I swear by the god of my people I will!' said Ailill. But they still waited for a long time until they were sure that C·chulainn had left the area of the ford. Aillill then said they would depart the place and make all speed to Cuailnge, travelling day and night.

'If this continues as it has done the youth will have killed a full two thirds of us before we get there,' said Ailill as they started off.

As they proceeded northwards the magical harpers of Cßin Bile left their mystical home from behind the red cataract of Es Ruaid, and with their dulcet notes and siren melodies they attempted to enchant the host. But Ailill's host had not the ears for such sounds, and thought they were spies from Ulster. They chased the but the harpers flew ahead of them to the north, and eluded them at the stones of Liac M¾r, for they were druids of ancient learning.

In Conaille, by the ford at the river NĒth, an enraged Lethan waited for C·chulainn. When the youth arrived, he slew Lethan and left his head by his body. This ford is since called ┴th Lethan. At another ford before this event so many chariots were shattered in a battle with the lone youth the place is still called ┴th Carpat, the Ford of Chariots. In the breadth of land that lies between these two fords fell Mulca, who was Lethan's charioteer. This place of land is called Guala MulchaĒ, Mulcha's Shoulder.

And it continued, so that whatever progress the host of Ailill and Medb made as they proceeded north across Breg Plain, they lost men continuously - all sent to their graves by a single youth from Ulster.

Previous - The Charioteer
Next - Morrigan and the Bull