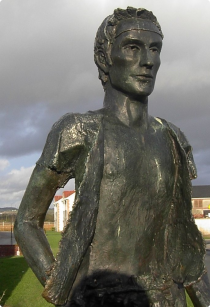 Statue at housing estate in Dundalk depicts Cuchulainn as a young boy.

Statue at housing estate in Dundalk depicts Cuchulainn as a young boy.

Aillill, who had watched the proceedings with growing concern, said then that they must consider the type of enemy they were facing. He ordered camp to be set up and called Fergus to him as he ate later the same evening.
'Well, was it their leader Conchobor who performed this act?' he enquired.
'Not at all. Conchobor would not approach the border country without a full battle-force around him', replied Fergus.
'Was it Celtchar mac Uthidir, then, or Eogan mac Duthacht?' asked Ailill.
'Neither of those,' said Fergus. 'They are like Conchobor. It was C·chulainn who did this. He struck the fork from the tree with one stroke, he killed your four men without catching his breath, and he has come to the border with only his chariot.'
'You must tell me more about this incredible Houd of Ulster. Is he very old for such feats? Tell me, so I can understand my enemy.'

Fergus settled down and started.

'In his fifth year he went to Emain Macha from his home in D·n Dealgan by the Muirtheimne Plain, and started training with the boy-troops. When he was seven summers he went to study with the warrior-queen Scathach, and he also courted Emer. In his eighth year he took up arms. He is now seventeen.'
'Seventeen!' exclaimed Medb. 'And is he the hardest they have in Ulster?'
'Indeed he is,' replied Fergus. 'You will find no-one harder, no one more cruel or ravenous in battle, no man so warped nor yet so beautiful in combat. I could go on, but there is simply no man like C·chulainn.'
'You are making too much of a seventeen year-old, I imagine, Fergus. He has one body, he can be wounded, he can bleed. He is not beyond being taken now, before his manly deeds are done.'
'Queen, you know nothing much of the Hound of Ulster at all. When he was younger his manly deeds were already many and more than those of a man my age now.'

'Cuchulainn, it is said by some, is the son of Sualdam and his wife Deichtine. Sualdam holds the area of Muirtheimne Plain for Conchobor and his fort is on a raised mound just beside the bay. There are others, though, who say that while Dechtine is the mother, the father is not Sualdam. By some accounts, Dechtine was spirited away on her wedding night by the god Lugh to his fortress under the mound at the place which now bears his name. This place is not the old Danaan mound by the Br· na Boinne but another, more sacred to him, concealed in the forested hills much closer to the Plain at Muirtheine. For three days the men of Ulster searched for her in vain. It is said by these same folk, and I believe them, that she reappeared just as suddenly back in the fort at D·n Dealgan, in Sualdam's wedding bed, already heavy with child, and her mind dazed.

The child was born and named Setanta - and this I saw myself: never was there a child more advanced and precocious as that one. Sualdam treated him proudly but more like a foster-father than if related by blood. When he was five years he was fed up with living at Muirtheimne and, having heard about the boy-troops at Eamain Macha, asked his mother for her permission to leave.
'You are too young to go,' she told him, 'and there are no Ulster warriors to accompany you.'
'I cannot wait and I do not need nor want the accompaniment of warriors,' said Setanta to his mother. 'Show me where Eamain lies and I will leave now, with or without your permission.'

Knowing her son only too well, Dechtine resigned herself to the inevitable.
'To the North then, but the hard crossing of the mountains at Sliab Fuait lies in your way.'
'Those I do not care about,' said Setanta, and off he went to prepare for the journey. He assembled together his toy shield made of sticks, his favorite toy javelin, his hurling stick and ball, and set off for Eamain.

To pass the time he would throw his javelin far ahead of him then run and catch it before it fell, or he would hit the hurley ball with the stick and run to strike it again, and not once did the ball touch the ground from Muirtheimne to Eamain. When he arrived at the playing field outside Eamain he saw the boy-troops practicing, and, not knowing he needed a promise of safety from the boys before he joined them on the field, ran to contest with them at sport and war-games.
'Look at this one!' they exclaimed. 'Without a doubt he's from Ulster, judging by the gall of him. Let's teach him a lesson for his brazen nerve!'

They went for him and flung three times fifty javelins at him, all of which he stopped with his toy shield made of sticks. Then they threw their hurling balls at him and he stopped them with all with his chest and returned them with a sweep of his stick. Frustrated, they even flung their hurleys at him, spinning end over end: some he caught by the handle as he dodged them all.

Then Setanta was taken by the Warp-Spasm. Each hair on his head stood upright, like spines, and each one was tipped with a fire-spark. One eye squeezed tighter than the eye of a needle; the other opened as wide as a goblet. His mouth opened and stretched to his ears, his lips peeled back until all his teeth showed and you could see straight down his gullet. All around his head the hero-halo spun and flashed like a falling star. He attacked the boy-troops. Fifty fell before him as they fled towards the gates of Eamain. Only nine made it through the gates, and these fairly flew across the fidchell board where Conchobor and I were playing. As Setanta passed by, the Warp-Spasm lessening, Conchobor grabbed at him and held him close.
'Whose child are you that you seek to injure the youths of Eamain?' he demanded.
'I am Setanta, your sister's son. I came here to join with you and these boy-troops attacked me on the field outside.' replied Setanta.
'You do not know our ways, young child. You must ask for protection before you enter the field.'
'I did not know that, but I ask you now, protect me from them.'
'You have it,' Conchobor said, and let go of Setanta.

The boy made to chase after the nine again, where they had sought refuge in the great house, but Conchobor caught him again.
'What are you going to do now, young Setanta?' he asked, a smile hovering at the edges of his mouth.
'I'm going to offer them my protection!' the youth of five summers said.
'Offer it now, to me.' said Conchobor.
'Done!' said Setanta, and Conchobor and I teased the nine from the house and they returned to the playing field with Setanta. By this time the fallen fifty were awaking and getting to their feet, with assistance of the others.'

'Another time, after he had settled in with us, he couldn't sleep. The moans and complaints from him meant that none of us could sleep either, so a frustrated Conchobor asked him what his problem was, and he replied that he needed the same level under his feet and head in order to sleep. Conchobor arranged to have two blocks of stone brought to the house for him; one for his head and the other for his feet. Then Setanta laid down and had his first good night's sleep in ages. The next morning, late, we all woke to find Setanta still asleep. After a while on of the men went to wake him up, and shook him by the arm. Setanta lashed out in alarm, his fist crushing the man's head and the outflung arm crushing the block at his own head to dust. That is why, to this day, no man will awaken C·chulainn. They just leave him to wake up on his own.

He had a ferocious dirty temper at times. Once, on the playing field, there were three times fifty of the other boys against him. Normally this would not present him with any difficulty, but this time someone got hold of him, and before you knew it there were thirty boys hanging off him. Angrier more at himself than at the boys, Setanta went into a Warp-Spasm and went through the boys like a hot needle up a hedgehogs arse. Conchobor had warned him previously about falling into the Warp-Spasm; it took too long to repair the damage afterwards. And now it was that Conchobor lost his temper too, and with the men of Ulster ranged about him, chased after Setanta all through Eamain Macha. He got away though, and could not be found for hours afterwards. Eventually he was discovered hiding under Conchobor's bed, the spasm past, but it still took Conchobor, myself, and thirty men to get him out from under it. By the time we had him the room was a wreck and the bed was in splinters. The sight of us was so ridiculous that Conchobor started laughing until he had to sit down, tears streaming. And then we all had a good look at each other, and started laughing as well.

Anyway, peace was made with the king and the child, and not for the last time...'