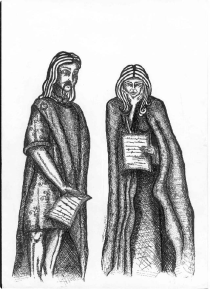 Sketch shows Maeb and Ailill comparing their possessions. Ultimately they discover that their collection of personal wealth is the same save for Ailill's bull.

Sketch shows Maeb and Ailill comparing their possessions. Ultimately they discover that their collection of personal wealth is the same save for Ailill's bull.

Ailill and Medb, king and queen in Connacht, lay abed in their chamber at the fort in Cruachan. Feeling smug after his recent conjugal endeavours, Ailill said to her:
'It's true what they say, love, "all is well for the wife of a wealthy man."'
'You might be right there, husband, but why is it you had that thought in your mind?' she replied. To which question he replied in turn, 'I was only just thinking how much better off you are now, compared to before you wed me.'
'Hold on now, you, I was fine enough and wealthy enough before I ever saw the face of you! 'she retorted haughtily.
'I don't know about that.' Ailill said, his temper roused. 'I never heard your wealth mentioned much at all before I chose to marry you! I know you had your woman's things, but all I ever heard of you was when your neighbours came raiding and stealing away what you lacked the power to hold, and that's the attraction you found in me: the strength of me and my men to protect what you had left.'

'You conveniently choose to forget that the High King of Ireland, Eochaid Feidlech the Steadfast, was my father, and I the highest and haughtiest of six sisters; outdoing them in combat and battle.'      Medb climbed from the bed, turning on her husband. 'I had fifteen hundred men-at-arms in my court, all of them the sons of exiles, and again the same number of native freeborn men. For every paid soldier I had ten more men, and nine more for each of them, and eight more, and seven, and six, five four, three, two and one. And, I'll have you to remember, that was only our ordinary household.
'My father gave me a whole province to rule: this one, Cruachan! Men came from Leinster and Ulster to woo me and to take me back with them. But I refused, for I asked more of a husband than any Irish woman before me asked: the absence of fear and jealousy and meanness. If I married a man who was mean our union would be wrong, because I am so giving and full of grace. It would be an insult if I were more generous than my husband, but not so if we were equal in this aspect. If my husband was a timid man that would also make the union wrong, for I thrive on all sorts of mischief. It is therefore also an insult if a wife to be more spirited than her husband, but not if we two were equally spirited. And if I married a jealous man that would be wrong; as you knew and still know I have never had one man without another waiting by the bed.
'That is how I ended up with you, Ailill. You are not greedy or jealous or sluggish. Do you remember what I brought to you when we were promised: outfitting for a dozen men, a chariot worth one and twenty bondsmaids, the width of your face in red gold and the weight of your left arm in light gold. If anyone causes you shame or upset or trouble then compensation will be mine to seek, for if anything you are a kept man.'

'I am by no means a 'kept man', Medb,' Ailill shouted back to her. 'I have two brothers who are kings, Coirpre and Finn in Temair and Leinster. They rule there only because they are older and I let them, not because they are better men. I never heard in all of the places in Ireland where a woman ruled a province, except this one; that is why I came and took the kingship here, in succession to my mother Mata Muiresc, Magach's daughter. I thought, "Who better for my queen than you, a daughter of the High King of Ireland?"'
'It still remains, oh husband of mine,' Medb gloated, 'that my fortune is greater than yours.'
'And that most definitely is not true. No-one has more property or jewels or precious things than I have.' Ailill sat back on the furs, his arms crossed.

And that then was the start of it. Medb dressed and flew outside, ordering all her possessions to be brought together in one place. Ailill followed and did likewise, and on two hills of Cruachan there rose two mountains: buckets, tubs and iron pots, jugs and wash-pails and vessels with handles. Finger-rings, bracelets, thumb-rings and other things of gold. Cloth of purple, blue, black, green and yellow, plain grey and many-coloured, yellow-brown, checked and striped. Herds of sheep were assembled, the rams also, and all were found to be equal in number and size. The horses were taken together, and the pigs and boars, and cattle. All these were matched and measured and noted and found to be identical. The king and queen fumed across the tumult of beasts at each other.

It was when the bulls were brought to the twin mounds that the scales tipped in Ailill's favour, for he had a bull, which had been a calf of one of Medb's cows, and Finnbennach was his name, the White-horned. The beast had refused to be led by a woman and had joined Ailill's herd, and Medb had no equal to this bull, and her spirit fell as if she hadn't a penny as she realised that Ailill had the better of her. In desperation she called for Mac Roth, her messenger, and she asked if in his travels he had ever seen a bull in Ireland the match for Finnbennach.
'I know where to find a bull the master of that one!' he exclaimed. 'In Ulster, in the place Cuailnge, in Daire mac Fiachna's house. He has the bull called Donn Cuailnge, the Brown Bull of Cooley.'
'You will get me that bull,' ordered Medb. 'Go to Daire and ask him to lend me the beast for twelve months. After that he can have him back along with fifty yearling heifers in payment for the loan. And tell him this, too: if he comes himself with the bull I'll give him a portion of the Plain of Aí the equal to his own lands, and a chariot worth seven times three bondsmaids, and my own friendly thighs on top of that.'