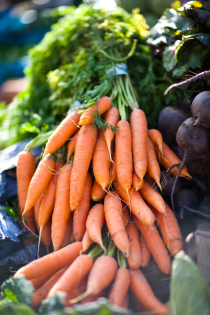 Dynamic changes in the approach to food and cooking occurred as humans progressively exerted more control over their coveted environment. The domestication of animals from the wild and the cultivation of edible plants began, as did the clearing of forests to grow crops.

The time-honoured Irish food journalist and author, Theodora Fitzgibbon, has suggested that “two or three hundred years ago in Ireland, the food was, in a way more imaginative than it is today, more especially in the use of vegetables.” One such example is globe artichoke bottoms which were used for stuffing as well as vegetables. Nowadays, though artichokes grow freely, they are perceived to be somewhat of a luxury item.

Charlock, not altogether unlike spinach, is now regarded as a weed despite having been consumed in large amounts in the 18th and 19th centuries.

Seakale, perhaps the most delicate of all winter vegetables, was known as strand cabbage in Donegal and was served like asparagus - embellished with melted butter. The humble, dare I say boring, carrot was made into a pudding with spices, eggs, breadcrumbs and butter.

Leeks and many other forms of onion, particularly garlic, are found in the earliest sources as flavouring as well as a food commodity.

Each country and region has their own form of cookery which is unique and exclusive. It may be strongly argued that classical cookery developed and emerged mainly out of poverty. Recipes advocating comfort food, such as stews and casseroles, were cooked in a skillet pot.

Most traditional Irish foods use simple, basic ingredients, which were dictated by the poverty of the country in the past. Nowadays, our modern chefs and food enthusiasts are revisiting these basic and simplistic foods and rejuvenating them by giving them modern twists.