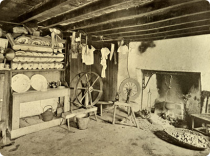 Photograph from 'Home Life in Ireland' (1909), by Robert Lynd. It shows a fireplace and dresser.

Photograph from 'Home Life in Ireland' (1909), by Robert Lynd. It shows a fireplace and dresser.

In his book, Fire, Fireplaces & Cooking (1992) K. Danagher describes one particular way of cooking fowl and feathered game. He suggests that the unplucked fowl/game would traditionally be covered in a couple of inches of mud or clay and baked in a hot fire. After the clay hardened and sufficient time had passed, the ‘self made clay cooking pot’ could be removed, broken and peeled away, bringing with it the skin and the feathers of the bird. This process of cookery has somewhat evolved and has now been replaced by a variety of other, perhaps more conventional methods, but also by cooking a whole chicken or a whole fish in a crust of salt.

Many commodities can be used to enhance the flavour of both poultry and game. Both are very versatile. They can be enjoyed when cooked in a very plain and simple manner, but also have the capacity to accept and suit intensive flavours. With regard to game, it is often marinated in strong ingredients like wine, juniper berries and spices to flavour and tenderise the meat. Because game is quite rich, it is often served with sauces that have a tart flavour like orange, kumquat or a host of other fruit-based compotes. Chicken is very commonly cooked in fragrant Thai- or Indian-based sauce, and the delicate and creamy flavours suit the texture of the chicken. The traditional festive turkey is seen as the pičce de résistance and much effort and worry goes into its successful culinary execution.