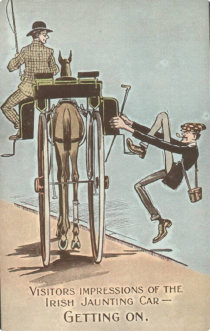 As with topographical postcards, publishers of Irish postcards sought to give a view of real life in Ireland by illustrating working practices, transport and communications.

The firm of Lawrence's of Dublin published many postcards depicting work practices. One such, published in 1900, gives an interesting sidelight on living conditions in Ireland at the time. It is entitled 'The Coal of the Country - Black Turf ! Black Turf ! Twelve Sods a Penny!

The small cart or slipe, used for transporting the turf, features in many early postcards; and resembles another cart depicted in a Northern postcard above the legend ' Evolution of the Irish Jaunting Car.'

The Jaunting Car is depicted on postcards from Dublin, Galway, Kerry to Belfast, Cork and all points west; it has been treated factually with photographic representations of actual jarvies and jaunting cars, and humorisly as cartoons.

The evolution of trams and trains in the major cities of Ireland was widely represented by postcard publishers, and this major development in transport and communications is represented by two postcards by Imperial Art Photo Co., Belfast. One card records the demise of the horse driven tram and is entitled 'Sacred to the memory of the Belfast Horse Car which succumbed to Electric Traction' and is dated 22 November 1905; its companion is entitled 'Starting Electric Trams in Belfast (Lisburn Road)' and is dated 29 November 1905.

Other work practices in Ireland included cutting the turf, fishing and the linen industry. The many facets of linen manufacture from the planting of flax glass seed, through retting, sorting, scotching and bleaching are treated in a series of postcards by Carter of Belfast. Spinning wool, embroidery (sometimes called Flowering), and thread making were all subjects for the postcard publisher. The fishing industry is widely represented by the Galway Hooker, the fishing fleets of Killybegs and Kilkeel, the currachs of the west coast and the Claddagh, and the 'fish curers' of Ardglass.

Other traditional crafts and trades that have been represented on Irish postcards include the toy industry of Ballycastle, and the different styles of thatching throughout Ireland.

Black Turf - The Coal of the Country

Previous - Leisure, Recreation And Distraction
Next - The Political Postcard