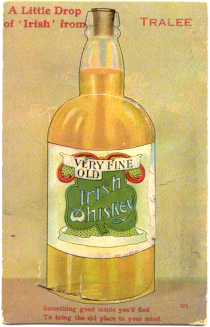 This is a whimsical novelty postcard displaying a bottle of whisky which has a flap containing twelve fold out photographs of Tralee. Most of the photographs are from the Lawrence Collection (1890-1910)but also include a photograph not available elsewhere in Kerry County Library's Collection. This postcard highlights how postcards can display rare and unique material.

This is a whimsical novelty postcard displaying a bottle of whisky which has a flap containing twelve fold out photographs of Tralee. Most of the photographs are from the Lawrence Collection (1890-1910)but also include a photograph not available elsewhere in Kerry County Library's Collection. This postcard highlights how postcards can display rare and unique material.

The postcard became a popular form of communication in 1894 when private individuals were first allowed to send postcards through the post. They enjoyed a lower rate of postage over ordinary letters and became very popular with the public. Many commercial providers were attracted to the format and intense competition ensued leading to a heavy volume and wide variety of postcards.

As well as being sent in the post, they quickly became attractive to collectors both private and commercial and as a result of this a great proportion of them have been preserved.

Because of its many tourist attractions, traffic in postcards in County Kerry has been very high. Killarney, arguably Irelands most popular tourist destination is responsible for the majority of County Kerry postcard collection.

While scenic postcards predominate other visual aspect of the county are not neglected. Archaeological and historical buildings and remains are always popular, offering a tantalising glimpse of the distant past. Urban street scenes are quite common throughout the collection and many of these are quite invaluable providing a unique snapshot of a moment in time. Churches both old and new are also recurring postcards subjects.

Postcards more than photographs have a social and historical dimension. They carry a message and a postage stamp denoting a time and place. A picture often unique and not reproduced elsewhere, and more than once in this collection the sender was a witness to a significant event of local and national importance.

Kerry County Library's Collection comprises over 250 postcards covering the early days in the 1890s until the early 1960s. They represent a cross section of the postcards available throughout this period and concern a county that attracts a lot of visitors and contains a wide variety of attractions.

Unusual postcard from Lawrence Collection focusing on people at work. The people in the shot are showing no more than a casual interest in the photographer except for the young boy who is giving him his complete attention.

A romantic and romanticised postcard of Ross Castle.The swans and fishing boat are almost certainly additions to appeal to the visitor. There is an element of improving on pecfection in this photograph.

This second photogaph offers a number of contrasts and changes to the earlier postcard. It is perhaps ten years later.The townsmen,except for the young boys,show very little interest in the photographer.Indeed they appear to show no interest at all. The sender of the photograph refers to "Mr Donkey and cart standing in the street" The barrels of porter were a common feature of the town in 1908 and for many years later. The trees attached to the Church of Ireland presbytery are now enclosed by a wall which stood until recent times

A striking photograph of St.James's Catholic Church in Killorglin.. The photograph is particularly interesting as the church was newly built at the time the photograph was taken and work on the interior continued into the 20th century.As individual Lawrence photographs are unable to be dated ,this photograph is estimated to have been taken between 1890 and 1910. The foundation stone for the church was laid in 1886.