View of Castle Street, Roscrea, with the Castle on the left

View of Castle Street, Roscrea, with the Castle on the left

Ros Cré, meaning "Wood of Cré" stands at what was, in ancient times, an area of great strategic importance. Cré, who gives the town its name, was the wife of Dála, after whom the great Sligh Dálawas named. This was one of the five great ancient roads of Ireland that ran from Tara to North Kerry. Roscrea was also an important crossroads on the road leading to Aghaboe and Ossory. Cronan of Éile has very close links with the area, and it was around Augustine monasteries he founded, in the 6th and 7th Centuries, that the town of Roscrea grew up. 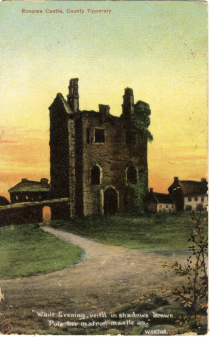 Painting of Roscrea Castle, with a verse from Warton

Painting of Roscrea Castle, with a verse from Warton

The town flourished, to such an extent that its affluence attracted the interest of Danish raiders, who attempted to plunder the town during the annual fair in 942. The townspeople repelled them, however, and the Danish leader, Olfinn, along with 4,000 of his men, were reportedly slain. The attack of Murtagh McLoughlin in 1157, however, was much more successful, and resulted in great plunder and destruction. Roscrea was the seat of a diocese at the time of the Norman invasion, united with the diocese of Killaloe, and in 1213 Bishop O'Heyne granted King John permission to erect a castle in the town. It was subsequently granted to Theobald FitzWalter, of Butler fame, whose family gained control of the manor of Roscrea soon after.

The Visits of Eoin Roe O'Neill

During the Confederate War Roscrea (along with Nenagh) was held by Sir George Hamilton for the Earl of Ormond. In 1646 Eoin Roe O'Neill took the town in, Carte claims, a very bloody manner. O'Neill, he writes, "put man, woman and child to the sword except the Lady Hamilton…and a few gentlewomen he kept as prisoners." Indeed Lady Hamilton was to play unwilling hostess to O'Neill again three years later. Having provided them with "whole ricks of oats, hutches full of beare and oaten malt", she later had to pay them Ł7 to ensure they left the castle in peace.

It was Lady Hamilton that held the castle until the arrival of Cromwell. By the time Ireton reached the town, in September 1650, Irish resistance to his and his father's army was confined to guerrilla attacks. One of the strongest of these guerrilla forces was based in the Offaly region, and they frequently engaged the enemy in and around Roscrea. These, however, only delayed the inevitable: the Cromwellian plantation was set in motion in Roscrea in 1653.

Oval view of the junction of Bunker Hill and Grove Street, framed with shramrock

Oval view of the junction of Bunker Hill and Grove Street, framed with shramrock

The 1841 census recorded that Roscrea housed a population of over 9,000, but the Famine and emigration greatly decreased this number. Between the years 1901 - 1961, however, the town enjoyed a 45% increase in population, among the highest in the country. The available workforce greatly assisted in the development of industry in the area, along with the town's prime location on the Dublin – Limerick route. Today the modern industries of food processing and pharmaceuticals have taken over from the older, more traditional woollen industries, brewing, distilling and tanning.