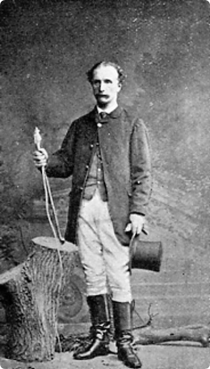 Copy of photograph of Gerald R. Dease taken from "A complete history of the Westmeath Hunt" by Edmund F. Dease

Copy of photograph of Gerald R. Dease taken from "A complete history of the Westmeath Hunt" by Edmund F. Dease

Mr. Gerald Richard Dease of Turbotston House, became Master in 1861 agreeing to take a loan of the hounds under certain conditions from his predecessor. (This agreement formed the basis on which the pack of hounds would transfer from one Master of the Hunt to the next.)

Mr Dease spent seven seasons as Master (1861-1868) and during that period it was decided to build county kennels at Culleen (sometimes called Cullion) and in 1866, some Ł330 was raised by subscription for this purpose.

Mr C.MacDonald Moreton took over Mastership of the Hunt between 1868-1871.

On the opening day of the Season in 1871-2 Captain Richard Coote was appointed Master, he had previously hunted harriers in his native County Cavan. He remained Master until 1872 when he was replaced by Capt Reginald Greville-Nugent who lived at Clonhugh.

Copy of agreement between owners of Westmeath hounds and Gerald R.Dease taken from "A Complete History of the Westmeath Hunt by Edmund F.Dease

Previous - Masters of the Westmeath Hunt
Next - Reginald Greville-Nugent