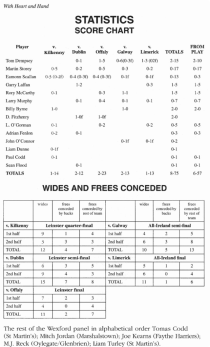 It was not one of the great All-Ireland finals but the tension, the drama and the death defying refusal to concede by the Wexford backs, kept the capacity crowd enthralled to the end. Wexford had created 32 scoring opportunities and Limerick 26. Wexford did not appear to be disadvantaged by playing with 14 men. They deserved to win and their defence was simply heroic. The Limerick forward lines scored only one point, by T.J. Ryan, in the second half. Fitzhenry, as usual never put a foot wrong. Ger Cushe, Liam Dunne, John O'Connor and particularly Colm Kehoe were magnificent. Kehoe's last 15 minutes will never be forgotten, as he tigerishly snapped at the heels of every green-shirted opponent in his vicinity. Despite a badly damaged knee, he epitomised the fighting spirit of Wexford, coming away from much taller and heavier adversaries with the precious leather grasped safely in his hand. Dunne earned the RTE 'Man of the Match' award for his endeavours. Wexford people will never forget his sally from defence and subsequent run along the Hogan Stand side line. He dodged opponent after opponent before bringing the sliothar over the halfway line. Rod Guiney played his part and Larry O'Gorman gave a faultless display of catching, running and striking. For long periods he looked the best player on the pitch- a complete hurler, who as well as defending superbly found time to go forward and notch two valuable points. Adrian Fenlon had a remarkable match and his first time striking and linking was an invaluable asset to his team. He was well supported by the tireless George O'Connor, who was still full of running at the final whistle.

Wexford had more opportunities in the second half but shot many wides. In the 70 minutes they shot 11 wides to Limerick's 9. In the forwards, Martin Storey played well, leading by example, and Tom Dempsey contributed 1-3 and played confidently and effectively. The real surprise packet was Garry Laffan. He won many balls and was a constant menace to the Limerick full-back line. He could and should have finished the game with a contribution of 1-5 but the incomparable Joe Quaid and some wayward shooting kept his tally down to a profitable 0-3. The ball did not run for Rory McCarthy. George O'Connor, 18 years his senior, kept reassuring him during the game. 'Be patient. Be patient.' Before the Leinster final, for which George had been injured, he had approached Rory and encouraged him. 'We are both St. Martin's men and I'll be hitting every ball out there with you today. We'll win it together.'

Larry Murphy after his brilliant opening point, faded and was eventually substituted in the second half... The sending off of Eamonn Scallan was ironic. Tom Dempsey and Eamonn were the two Wexford players who were continually accused of not being physical enough. They were often goaded because they did not assert themselves. Scallan was unfortunate in picking the wrong occasion to lay these accusations to rest. Apart from his excellent contribution to Wexford's magical year from frees, the Liam Mellows man, a brilliant first-touch hurler; had played a largely unselfish part in the team plan. To a great degree, he had been sacrificed in the Leinster final, in order to drag his marker away from the edge of the square and create space for the rest of the full-forward line. He was one of only two Wexford forwards to score in all their championship matches. His contribution was clearly understood and appreciated by those with an inside knowledge of the game and its tactics, despite the fact that some commentators failed to fully comprehend his role.

Extract from Tom William's With Heart and Hand.

Previous - The Last Great Victory
Next - The Final Whistle