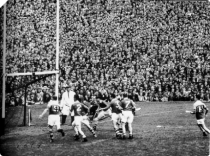 Nicky Rackard (14) leads the charge into the Cork goalmouth in 1956 All Ireland senior hurling final in Croke Park.

Nicky Rackard (14) leads the charge into the Cork goalmouth in 1956 All Ireland senior hurling final in Croke Park.

For honest endeavour, outstanding individual performance and sportsmanship it would be hard to surpass the 1956 All-Ireland final between Wexford and Cork. For tension, drama and excitement it is doubtful if the last few minutes of that memorable game have ever been or will be surpassed.

For it was the happenings of a brief few moments that assured immortality for one man and robbed another of a unique record. With time running out fast for Cork and champions Wexford leading by 2 points, 1-13 to 2-8, Christy Ring, for once, got inside Bobby Rackard and raced towards the Wexford goal.

The prospect of an unique 9th All-Ireland medal dangled in front of the Cloyne man and the Croke Park crowd held its breath a moment waiting to acclaim, surely, a Cork goal.

There was only one Wexfordman unmoved by the whole thing and he was in the right place. No one would have blamed Art Foley if he had 'dived for the camera'. The St. Aidan's man, however, had no such intentions. He had the situation completely under control and he knew it.

He had the ball covered from the time it left Ring's hurl. For once the maestro had been anticipated. His golden drive did not reach its pre-destined position. It reached the sure hand of Art Foley who grabbed it safely, side-stepped the incoming Ring and another Cork forward and put the finishing touches to a magnificent piece of work with a tremendous clearance.

The cheering which greeted the save rocked Croke Park to its very foundations. It grew in its intensity as the goalie's clearance reached Jim English and rose to a crescendo as Nick Rackard picked up his clubmate's drive, side stepped John Lyons and left Cashman groping with a bullet-like drive. Not even Ring could save the situation now and Tom Dixon added a point to leave the final scores 2-14 to 2-8 in Wexford's favour. All the critics had now been silenced- Wexford had beaten Cork and Tipperary in one year.

Previous - Celebrations 1955
Next - A Classic Final