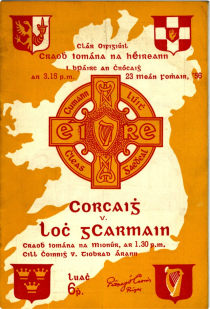 The 1956 final, postponed for three weeks owing to an outbreak of polio, was a memorable and tremendously exciting one. The champions started in style, held the advantage for most of the first half, and led by 1-6 to 0-2 after 25 minutes. Yet, those twenty-five minutes provided two memorable incidents. One was supplied by Mick Morrissey's tremendous goal-line clearance and the other by Bobby Rackard who tapped the ball off Ring's hurl when a Cork goal seemed certain.

A typical Cork resurgence before half-time brought three points without reply and there was only 4 points between them at the interval, 1-6 to 0-5. With Ring and Paddy Barry to the fore, Cork got back on level terms early in the second half. Ring then put Cork ahead and Nicky Rackard balanced. Tim Flood made some devastating solo runs and Seamus Hearne played his heart out at midfield as the battle swung one way, then the other until Foley's save changed the trend and decided the destination of the McCarthy Cup.

But the memorable incidents did not finish with the final whistle. Immediatley after it Ring was seized by Bobby Rackard and Nick O'Donnell and carried shoulder high from the field. It was a fantastic scene, a memorable moment in a year of many memories.

To hear the final minutes of this memorable final click here