Nicky Rackard during the National Hurling League game against Dublin in Enniscorthy, 1953.

Action shot of Nicky Rackard, centre, during the National League game against Dublin in Enniscorthy, 1953.

Nicky Rackard during the National Hurling League game against Dublin in Enniscorthy, 1953.

Action shot of Nicky Rackard, centre, during the National League game against Dublin in Enniscorthy, 1953. 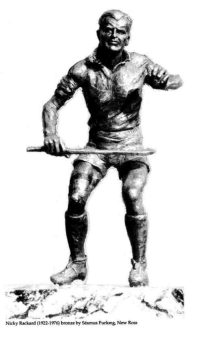 A tribute to Nicky Rackard


The challenge of an ancient game

Brought glory, glory to your name

To watch you gentle hero.

In life's long march you made us proud

And many a voice from out the crowd

Called out your name aloud, aloud

And Blackstairs men who saw you then

Still speak of you in awe,

On Carman's green where you had been

They tell of what they saw,

We watched you on September fields

And lightning was the drive

The hand that held the stick of ash,

And the man who led with style and dash,

Oh! Carrigtwohill once felt the crash

And Bennettsbridge and Thurles.

And when in later life you beat

The devil on that lonely street

You showed us how to take defeat

With dignity and courage.

The last parade was sad and slow

And as, on green fields long ago

The Diamond stood beside you

Old friends they flanked you side by side

And the tears they shed were tears of pride

An ash tree toppled when you died

And scattered seeds at random.

Copyright managed by the Library Council