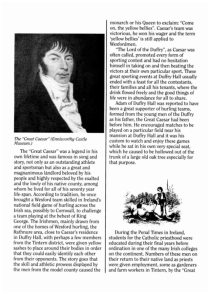 No doubt you'll hear it today at Croke Park- "Come on the yellow bellies". But don't go jumping to any hasty conclusions for that nickname was proudly won by Wexford hurlers over two hundred years ago. And it certainly does not infer cowardice or a "yellow streak".

Here's how the name was coined and stuck, Sir Caesar Colclough of Tintern, in south Wexford, a descendant of one of the old Norman settlers of 1169 is said to have been on friendly terms with King William III (of battle of the Boyne fame) and often boasted of the hurling skill of his south Wexford tenants and neighbours.

William eventually challenged him to bring over 21 Wexford men to play an equal number of Cornish men, whose skill, no doubt inherited because of their Celtic origin, made them foremost among the English as wielders of the caman.

Prior to the challenge game, Sir Caesar held a trial match between two local south Wexford teams, the Scarrougns (so called because they hailed from south of the river Scar which flows into Bannow Bay) and the Beany Boys (men from the baronies of Forth and Bargy where beans were formerly extensively grown). Following this trial game Sir Caesar picked 21 of the best hurlers from both sides and set off with them for Cornwall.

The Wexford men were accorded a royal reception. The Cornishmen looked with contempt on their Slaneyside opponents as they stripped. But, Sir Caesar gave his men a glass of whiskey apiece and told them to tie yellow kerchiefs around their middles so that they would easily recognize each other on the field. This they did and then trooped on to that Cornish Croke Park that day in the 17th century.

Of course they literally hurled their opponents off the field, exhibiting, in the course of doing so, such a degree of skill and craft that William and his queen were heard to shout "Well done, yellowbellies", "Fine fellows, yellowbellies". The name stuck to this very day, and Wexfordians are proud of it.

Today you'll hear it shouted during the big game by excited fans from the same baronies and bearing the same name as those Wexford hurlers of old who brought fame and a nickname to their native county.

Previous - Faction Fights among the Fairies
Next - Camogie