Egan: History, Guide & Directory of County and City of Waterford 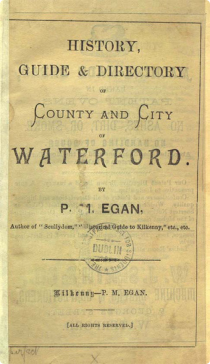 History, Guide And Directory Of County And City Of Waterford by P.M. Egan published in 1895 recounts over 1,000 years of the history of Waterford city and county from the time of the Vikings until the close of the 19th century.

Megalithic and Neolithic tombs particularly at Gaulstown, Knockeen and Matthewstown, ogham stones at Dromore and the early Christian monastic settlement including a round tower at Ardmore testify to thousands of years of civilisation in County Waterford or Port-Lairge. Waterford is also known as An Déise after a tribe driven from the plains of County Meath . The most powerful of their Gaelic Irish descendants in the 12th century were the Ó Faoláin or Whelan clan. In the 9th century Viking raiders established a settlement at the mouth of the Nore, Suir and the Barrow rivers, known as 'The Three Sisters,' that became Waterford City and the seat of Viking kings until the 12th century.

In the 12th century Strongbow led the Norman invasion of Ireland and married Aoife, daughter of Dermot McMurrough, King of Leinster, the day after he captured Waterford city. Afterward Henry II declared himself Lord of Ireland and Waterford became one of the most important walled medieval Norman cities in Ireland . Waterford city and county was ruled by the Fitzgerald dynasty who controlled the Earldom of Desmond. Religious orders such as the Augustinians, Dominicans, Cistercians and the Knights Templar established abbeys.

The Fitzgeralds and the Gaelic Irish of Desmond refused to renounce their Catholicism following the 16th century English Protestant Reformation but were militarily defeated, their territories devastated and planted with Protestant settlers. Waterford city remained Catholic until it surrendered to Henry Ireton in 1650 following the defeat of the Kilkenny based Catholic Confederacy who for a brief period ruled most of Ireland independently. Catholic defeat followed again at the Battle of the Boyne in 1690 and thereafter Waterford city and County were dominated by an Anglo-Irish Protestant elite. The title of Marquess of Waterford was held by the Beresford dynasty while Lismore Castle became the seat of the Cavendish dynasty, the Dukes of Devonshire.

In the 18th century Georgian period Waterford city became Ireland 's third largest port with a mile long quay that extended from Grattan to Adelphi Quay. As its economy prospered and its architecture improved thanks to its most celebrated architect, John Roberts, Waterford became a centre for crystal glass making in 1783 when a factory was established by the Penrose family. Shipbuilding also thrived. Political and religious discontent motivated the radical United Irishmen who were very active in Waterford . However no armed uprising occurred there due to the defeat of the ' Wexford Republic ' in 1798. The Waterford economy went into a spiral of decline following the passage of the Act of Union 1800 and an economic slump following the end of the Napoleonic Wars in 1815.

During the 19th century, the Irish Catholic tenant farmers and landless peasants became increasingly destitute and dependent on the potato crop for their survival. In the Great Irish Potato Famine from 1845 to 1852, an estimated one million people died and another million emigrated. Waterford city's population swelled with refugees from the countryside. Large quantities of rice in Waterford were distributed to the starving. The Young Irelander, Thomas Francis Meagher, inspired by renewed revolution in France returned to the city of Waterford and flew the first Irish republican tricolour of green, white and orange.

In the late 19th century, the Fenians, the Land League and the Irish Parliamentary Party became involved in a sustained campaign of agrarian agitation that culminated in the break up of the landed estates and most tenant farmers buying their own land by the early 20th century. Waterford MP John Redmond led a peaceful democratic drive for Irish Home Rule and the restoration of the Irish Parliament. However the rise of Sinn Féin and the IRA after 1918 led to the Irish War of Independence. In the Irish Civil War, Waterford city was the scene of fighting between Free State and Anti-Treaty republican forces.

The writer P.M. Egan was a native of Kilkenny city. He was a passionate antiquarian and also a publisher. His printed primary educational texts had a wide circulation in England and Scotland . He also wrote a well received novel entitled Scullydom. In recognition for his literary achievements, the people of Kilkenny elected him mayor in 1887.

Previous - Downey: The Story of Waterford
Next - O'Donovan: Letters containing information relative to the Antiquities of the County of Waterford