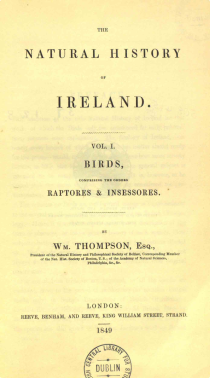 William Thompson, 1805 –1852,  was an Irish naturalist. He is remembered for the Natural History of Ireland which he published in four volumes between 1849 and 1856.

William Thompson was born in Belfast, the eldest son of a linen merchant.  His family intended him to follow in the family business and he received a commercial education followed by an apprenticeship. William Thompson attended the newly formed Royal Belfast Academical Institution which had a strong natural history section and provided the basis for William’s later scientific interests.
Initially, William combined his involvement in the linen trade with his science interests. He joined the Natural History Society of Belfast and wrote extensively for science journals, becoming an authority on Irish nature, particularly birds. He eventually gave up his business interests and concentrated solely on science.
The Natural History of Ireland was originally published in three volumes. The forth volume was published after his early death, his manuscript edited by his friends as directed in his will. This volume also contains a brief biography and a portrait.

Previous - Hart: The Flora of Howth
Next - Geography of Ireland