Brian Boru was born around 940. He was the younger of two sons of Cennedig, head of one of the royal free tribes of Munster: the Dal Cais. He grew up during the worst days of the Viking’s tyranny when the Dalcassians had been driven in to the present county of Clare. As the eldest son, Brian’s brother Mahon eventually succeeded Cennedig as chief of the Dalcassians.

The Dalcassians were hemmed into Clare by the Norse Leader Ivar of Limerick and Mahon was willing to accept terms. However, Brian had seen almost all of the Dal Cais tribe, including his mother, brutally murdered by a Viking raid when he was only a child and refused to be any part of such a truce. He deserted Mahon and, together with a group of soldiers, lived in the hills of Munster and attacked Norse settlements.

Defeat of the Vikings

Brian’s fame spread throughout the province and infuriated Ivar. Although he had only a handful of men, Brian's skill as a tactician led him to defeat vastly superior numerical forces. After a number of small battles, Brian had trained an excellent Dalcassian army to face the Vikings. The stories of his triumphs had led to vast numbers of young men volunteering to join his side and the feud between Brian and his brother Mahon ended. Mahon renounced his truce with the Vikings and the brothers rejoined forces.

The two men triumphed and in 963 Mahon took the throne of Cashel. A few years later, in 968 at Sulchoid in Tipperary, they over-whelmed Ivar's forces and marched on Limerick while Ivar fled back to the Norse lands. The Viking tyranny in Munster thus collapsed and Mahon ruled peacefully for eight years.

However, Ivar returned to Ireland and murdered Mahon. Brian honourably challenged him to open combat, in which he killed Ivar, thus avoiding a bloodbath between his forces and those of Ivar. Brian succeeded his brother as head of the Dal Cais and immediately took the field against his brothers enemies. He attacked the Vikings of Limerick and their leader, King Imar, and his sons fled to the monastery on Scattery Island to take refuge. However, Brian was not deterred by the sacred traditions and broke into the sanctuary, killing hundreds of Vikings and desecrating the church. Step by step he established himself in the Kingship of Munster and fortified the province. In 983 and 988, his fleets ravaged Connaught and plundered Meath.

Meanwhile, another great leader had arisen in the North - Malachy the second, the Ui Neill King of Tara (b. 948). Malachy became High King when he overthrew a Norse army and took Dublin at the battle of Tara in 980. A clash between the Brian and Malachy was inevitable. At last, in 998, they met and divided Ireland between the two of them, Brian becoming the King of the South and Malachy the King of the North. 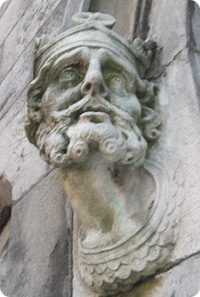 By 1002, it was becoming clear that the joint sway of Malachy and Brian could not last. Malachy, unable to gather enough support to take on the mighty forces of Brian, allowed Brian to take over his lands peacefully. This was the greatest moment in the history of native Ireland. Brian, by his title, "Ard Ri", was claiming the monarchy of the whole Gaelic race.

Before the time of Brian and Malachy, Ireland was divided in to a number of petty kingdoms, which were sometimes at peace, sometimes at war with one another. The Vikings themselves joined in the struggles between the Irish kingdoms and also fought bitterly among themselves. There was no one king until Brian Boru who was responsible for the defence of Ireland against the Vikings and had control over the entire island.

Brian had much to do as High King and was tasked with lifting Ireland out of the ruins of the Viking Age. He rebuilt ruined churches, built new ones, and sent men overseas to find replacements for lost books and artefacts. He did all that he possibly could to heal the wounds of the past two centuries of Viking pillage.

The Battle of Clontarf

In 1013, Mael Morda, King of Leinster allied himself with and the Dublin Vikings and revolted against Brian. The Dublin Vikings also sought allies overseas. The great Sigurd, Earl of Orkney, came with a large contingent while other Viking contingents came from as far afield as Iceland and Normandy. Brian defeated them at the Battle at Clontarf on Good Friday, 1014. However, as the Vikings were retreating, one of their leaders, Bothair, murdered Brian.

After this, Malachy resumed his position as High King and the Dal Cais strength remained only in Munster. The Viking presence in Ireland continued after Brian's death but their military power was crushed. They remained in the country as traders and intermarried amongst the native Irish. Ireland was never again to have a king to control the entire of the island. The cost to Ireland, and to Brian, of crushing the Viking power in this country was a great one, for Ireland was never again to have a true "ARD RI".

Previous - Viking Invasions
Next - The Visit of the Spanish Armada