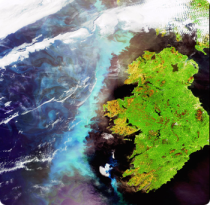 Courtesy of the EPA
Enlarge image
As there are some very striking regional variations, it may be best to think of the landscapes, as opposed to the landscape.

An image of Ireland processed from a space satellite gives some idea of these variations. Such images are readily accessible on Google Local where it is possible to view Ireland at a variety of spatial scales.

This reveals a general contrast

An illustration showing the 'Eastern Triangle'.

An illustration showing the 'Eastern Triangle'.

between much of the north and west, where the landscape appears more rugged, and the gentler appearance of much of the south and east. This contrast has its roots in the distant geological past and has led to economic and cultural distinctions over the centuries.
Today, the NW-SE

Malin Head, situated in Co. Donegal is famous for its rugged coastal scenery and lovely beaches. This aerial photograph displays the rock-scoured, grainy nature and rawness of the North-West Donegal up-lands. It is Ireland’s most northerly point and features the largest sand dunes in Europe.

regional contrast continues to be of great significance for agriculture and other aspects of economic development.

This feature explores some facts about the physical landscape of Ireland, and considers some of the processes that influence and have influenced its formation.

Photo showing the landscape of County Kerry, the south coast of Ireland.

Fertile fields in South Wicklow, the east coast of Ireland.

The Wexford landscape demonstrates the gentler appearance of much of the south compared to the more rugged north and west.

Mayo landscape with Nephin mountain in the background.