Origins of Mining in the Castlecomer Area 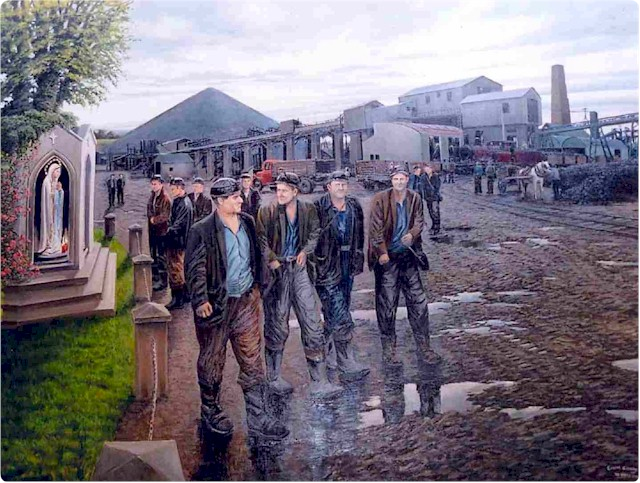 "The Miner's" by Kilkenny artist Eugene Conway is a large oil painting which hangs in the Church of the Immaculate Conception, Castlecomer.

"The Miner's" by Kilkenny artist Eugene Conway is a large oil painting which hangs in the Church of the Immaculate Conception, Castlecomer.

The civil parish of Castlecomer is one of the largest in County Kilkenny. It is situated in the northeast of the county in the barony of Fassidinan.

The Castlecomer Plateau, north-east of Kilkenny, delineates the extensive Leinster coalfield. Kilkenny coal has been exploited in this area since the 1600s, initially in conjunction with the mining and smelting of iron-ore.

In Castlecomer, Sir Cyprian Horsefield extracted iron in 1647. Christopher Wandesforde obtained these iron works and the lands of the Brennan Clan in Idough. Early Wandesforde manuscripts chronicle the course of iron mining in Fassidinan, the earliest mention being a furnace at Killdroyn in Idough, and also a forge in Ballinakill around 1635. Coal was discovered by accident while prospecting for iron which was commercially mined in Coolade, Crutt. There were also works at Firoda, Castlemynes and Coolbawn.

Castlemynes, i.e. Castle-mines, were taken over by Christopher Wandesforde. This was the beginning of the development of the Castlecomer coal mines that continued until the late 1960s. Mining technology was archaic until the introduction of English colliers from the Durham coalfields in the late 1820s. Deeper mines were sunk, which were worked by steam powered pumps, winding gear and mechanical coal cutting machinery. Trams were introduced for transportation of coal. Mining continued until 1969, when commercial mining ended with the closure of the Deerpark mine in Castlecomer.