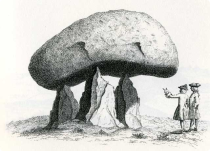 Proleek Dolmen is perhaps the most photogenic monument in County Louth. There is something about its massive yet precariously balanced capstone that delights the eye and stirs the imagination. This timeless allure is probably explains why of all the monuments recorded by Wright in the 1740s, it has changed the least.  It was built and used by one of the communities of people who inhabited Ireland in Neolithic and Early Bronze Age times (c.4000-1500 BC).

From excavated examples, we know that the burial rite in the megalithic tombs frequently took the form of collective burial. The particular burial rite appears to have involved the formal deposition of the de-fleshed bones (both cremated and un-cremated) of a number of individuals. These were accompanied by the fragmentary remains of pottery vessels, simple ornaments, and stone implements.

There are over 1500 known megalithic tombs scattered throughout the country and these have been classified into four main types by de Valera and Ó Nualláin: court-tombs, portal-tombs, passage-tombs and wedge-tombs (for further details, see Waddell 2000).

While passage tombs, such as the example at Newgrange, are often the most impressive megaliths, the court tombs are generally regarded as the earliest, dating back to c.3,800 BC. Portal tombs, of which the Proleek Dolmen is one of the finest examples, are often regarded as being related to court tombs. Their dating suggest a floruit around c.3,000 BC.

Close by the Proleek Dolmen are the equally well-preserved, but less spectacular remains of a wedge tomb. Such tombs are considered as belonging to the final phase of megalithic building activity, post- 2,700 BC. They are characterised by double-walling and a wedge-shaped gallery which is broader and higher at the front and invariably faces west or south-west.

The wedge tomb at Proleek is one of only a handful of such tombs in the north-east of Ireland: their overall distribution displays a marked bias towards the west and south-west.

Photograph of Proleek Dolmen in 1906 by H. G. Tempest (from the Journal of the County Louth Archaeological and Historical Society, Vol. 1, no. 3, between 46-47).

Photograph of Proleek Dolmen in the 1980s (from Buckley and Sweetman 1991, Plate Ia).