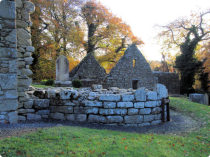 Round Tower Base at St Mullins

Round Tower Base at St Mullins 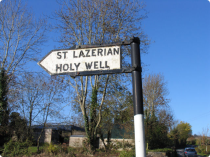 In this module folklore and historical fact are examined in the context of County Carlow. The story of "Mad Sweeney" [Suibhne Geilt] has been chosen as an example of a well-known tale with specific Carlow connections. However motifs or patterns contained within this tale show important links with Merlin and the Arthurian legend as well as with the story of the Children of Lir. The link between the hermit or recluse and the saint, in this case, Sweeney and St. Moling is also discussed. The life of St. Moling is revisited again in the subject of St. Mullins as a place of ecclesiastical antiquity in South County Carlow. The life and lore surrounding another prominent Carlow saint, St. Laserian of Old Leighlin highlights another important monastic site in this county.

The traditions surrounding the Holy Wells at these sites show similarities with those found all over Ireland. The "Pattern Day" at the Holy Well was usually held on the saint's feast day. "Pattern" derives from the Irish word 'patrún' meaning patron in English. On this day the local people gathered at the ruin of the church or monastery and especially at the Holy Well associated with the local saint.

Devotions typically included the making of rounds, that is walking around the site a prescribed number of times and the reciting of prayers. People would also drink water from the Holy Well and seek the intercession of the saint in obtaining a cure for ailments and diseases. The pilgrims frequently tied rags on nearby bushes or left coins in the vicinity of the Holy Well as part of the tradition. Differences both in the levels of piety displayed and in the preservation of the tradition are portrayed over time through the writings of the historians.

It is obvious however, that the importance of the local saints themselves and their sacred places are still a vital part of the culture and heritage of County Carlow.

Next - The Story of Mad Sweeney