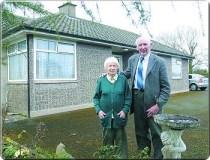 An Mangaire Sugach is the pen name used by the historian Mainchin Seoighe in his weekly Limerick Leader newspaper column Odds and Ends. The Mangaire's first article appeared on Dec 2nd 1944 and continued unbroken until 2002. This is an extraordinary record in Irish journalism which is unmatched by any other local or national journalist.

Mainchin Seoighe is a native of Tankardstown, Bruree, Co. Limerick. He is recognized as being Limerick's leading historian and has several books to his credit. Among his published works are Dromin Athlacca (1978) Portrait of Limerick (1982) County Limerick people and places (1993) and From Bruree to Corcomohide (2000). He has contributed several articles to local and national journals. He writes in both English and Irish and has published two books 'as Gaeilge'- Mariodh Sean Sabhat areir (1964) Cois Maighe na gcaor (1965). Some of his early published works appear under his English name Mannix Joyce. Mainchin Seoighe has been awarded an honorary doctorate by the University of Limerick in recognition of his outstanding contribution to the study of Limerick history and literature. Mainchin also worked as a member of staff of Limerick County Council.

An Mangaire Sugach means the 'merry pedlar'. The Mangaire adopted his "nom de plume" from the pen name first used by a leading Maigue poet of the 18th century Aindrias Mac Craith. Mac Craith too was a Kilmallock man and Seoighe was profoundly influenced by him and the other Maigue poets who flourished in the Croom area in the eighteenth century. Throughout his articles in Odds and Ends he makes several references to their rich legacy in the Irish language. Seoighe was also an ardent admirer of the Irish scholar Aodh de Blacam who also contributed to a national newspaper under the nom de plume Roddy the Rover. It was quite common at that time in the 1940's for newspaper contributors to use pen names.

The Mangaire's first article in Odds and Ends was titled 'The man of the roads'. In this article he stresses the importance of story or the 'sceal' in our lives. In the 1940's it was not uncommon for a poor man of the roads to call to houses and recount tales of adventure and romance. His love of story is a recurring theme throughout his articles and he also advocated the joy of reading and the value of books in one's life.

In subsequent articles the Mangaire returns time and time again to writing about the folklore and legends of County Limerick. He ends this first article by telling his readers about the spirit woman or 'bean sidhe' who it was said warned families of O's and Mac's of impending tragedy.

He did not write on any one single topic in his articles. Rather he could refer to three or four different items in any one article. Certain recurring themes however can be identified. The Mangaire was a consummate historian and continually wrote about national, as well as local events. He would write on the demise of the old Gaelic world which occurred after the defeat of the Irish at Kinsale, the treaty of Limerick and the flight of the so called Wild Geese. With the passing of this old order went too the prominence of the Irish language which was repressed almost entirely with the Penal Laws. Other national events were also referred to in Odds and Ends. The Mangaire was an ardent admirer of the ideals and aspirations expressed by Thomas Davis and the Young Irelanders. He also wrote in his articles about harsh nineteenth century events such as Land League evictions and workhouses. He wrote of men who fought for freedom during Easter Week 1916. He often quoted liberally from Pearse's poetry and writings. 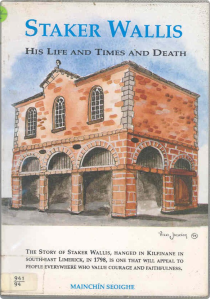 At a local level the Mangaire shows a breadth of learning that no other Limerick historian can match. He has written on local places such as his native Bruree/Kilmallock area, Glenanaar and the Ballyhouras, Knockfierna, Rathkeale and Croom. He has written extensively on places surrounding his native Kilmallock area such as Kilfinane and the heroism of Staker Wallis. Croom and the rich heritage of the Maigue poets also figure strongly in Odds and Ends. This rich Gaelic heritage in Limerick figures again and again in his articles. As a fluent Irish speaker, the Mangaire promoted the value of the Irish language and the richness in the meaning of our placenames. In his column he sponsored several competitions which encouraged people to document the Irish still remaining in Limerick. Religious themes often featured in Odds and Ends, whether recalling legends of the Crucifixion or stories attached to festivals such as Christmas and Easter. Folk customs too were also written about. Along with folk customs he also recorded rural living and the natural world.

Odds and Ends was also a great column for publishing the songs of Limerick. The Mangaire held a competition to collect all local songs, the results of which were published in April and June 1948.

The Odds and Ends column, which lasted over sixty years, is a testimony to the learning of its' author Mainchin Seoighe. It is also a great printed source of information for all aspects of Limerick history and heritage. This digistisation project endeavors to make these early articles of an Mangaire Sugach more widely available to all.

Next - The Lore of Reading