Ball: The Parish of Taney 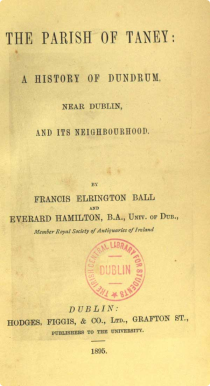 Ball, Francis Elrington, and Hamilton, Everard. The Parish of Taney: A history of Dundrum, near Dublin, and its neighbourhood. Dublin: Hodges Figgis & Co., 1895.

Ball, Francis Elrington, and Hamilton, Everard. The Parish of Taney: A history of Dundrum, near Dublin, and its neighbourhood. Dublin: Hodges Figgis & Co., 1895.

The Parish of Taney: A History Of Dundrum, near Dublin, And Its Neighbourhood by Francis Elrington Ball and Everard Hamilton was published in 1895.

According to tradition St. Nahi established a monastic centre on the site of the old St. Nahi's Church in Dundrum. 'Taney' the name of the parish, may have been derived from the Gaelic Teach Nahi which means 'Nahi's house' or Tamhnach which means 'a green field.'

Religious worship continued there until the Norman invasion of the 12th century. Taney Parish was a Rural See and in time became the Deanery of Taney. The church and the church lands became the property of the Archbishop of Dublin and was a prebend of St. Patrick's Cathedral. Following the 16th century English Reformation, Taney Parish became part of the Anglican Church.

Between the late 18th and early 19th centuries, the size of the parish increased and the old St. Nahi's Church proved to be inadequate for the congregation. The new Christ Church was completed by 1818 but unusually was not consecrated until 1872. Another church, St. Thomas' was built in 1874 and in time became a separate parish in 1956, before merging with Booterstown in the 1990s.

Permission for Divine Service was granted by licence in 1867 to hold services in what was then called the Dundrum Lunatic Asylum (currently the Central Mental Hospital ) where Church of Ireland services continued to be held into the 21st century.

At the turn of the 20th century the townlands of Taney Parish included: Balally, Ballinteer, Churchtown Lower, Churchtown Upper, Drummartin, Dundrum, Farranboley, Friarsland, Kingstown, Mount Anville, Mountmerrion or Callary, Mountmerrion South, Rathmines Great, Rathmines Little, Roebuck, Ticknock and Trimlestown or Owenstown.  In the 21st century it remains one of the largest Church of Ireland communities in the Republic of Ireland .

Previous - Church History
Next - Begley: The Diocese of Limerick