Lewis: A Topographical Dictionary of Ireland 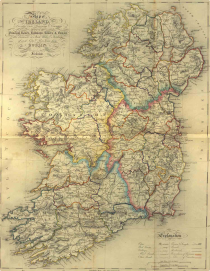 This topographical dictionary comprises of several counties, cities, boroughs, parish and villages – with historical and statistical descriptions – of Ireland.

The publication is part of works on England, Scotland and Wales, which together form Topographical Dictionaries of the three aforementioned countries and Ireland.

Along with visiting many of the sites in the book, the author sent proof sheets to knowledgeable locals in the area who would be able to add changes that had taken place in the meantime. For this reason and others, the publication of the book was delayed.

The spellings of place names in these volumes are as written at that time, and they differ from spellings that are found on other documentation. Where an Irish place name was found to be spelt in two different ways, a reference has been given from one to the other. All distances are given in miles and acres. Some of the entries are short, while others go deeper into history, geography, anecdotes, superstitions, and the life of the people in an area.

Samuel Lewis shows the reader various industries in areas around the country, while civil and religious parishes are identified and churches described.

A genealogist would find this very useful, while it would provide an important tool for those wanting to find out more without having to delve into historical manuscripts. The dictionary gives a unique picture of Ireland before the Famine.

First published in 1837 in two volumes, with an accompanying atlas, it marked a new and significantly higher standard in such accounts of Ireland.

Previous - Kohl: Travels In Ireland
Next - Luckombe: A Tour Through Ireland