Image of the tower and arch of the Abbey at Roscrea

Image of the tower and arch of the Abbey at Roscrea

The Francican Friary's imposing bell tower, which rises to a height of sixty feet, serves as an impressive entrance feature into Roscrea's modern Catholic Church. 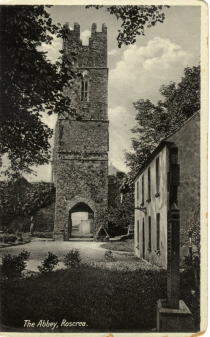 View of the arch and tower of the Franciscan Friary, the entrance to Roscrea's Catholic Church

View of the arch and tower of the Franciscan Friary, the entrance to Roscrea's Catholic Church

The earliest references made to the Franciscan order in the town dates to 1470, but there are differences of opinion regarding who founded the Friary, and when exactly it happened. The most probable founder was Maolruany na Feasóige, who died in 1443. Another theory, however, attributes its foundation to Maolruany O'Carroll, whose tomb, dated 1523, alludes to his involvement in the establishment of the Friary, or at least part of it. Records dealing with the Franciscans in Roscrea are unfortunately scant.

An inquisition of 1568 recorded that the site consisted of a house for the friars, a dormitory, the prior's chamber, a chapel, a cemetery, a garden and two orchards. Following the dissolution of the monasteries in the 1540s the Friary was granted to Thomas, 10th Earl of Ormond. The friars continued to live in the monastery, but they were finally driven out in 1579. It then fell into ruin.

The parts of the Friary that survive today are most of the north and east walls and the bell tower, which divided the nave and chancel of the church. Some carvings and decorations are still to be seen on the walls, including hood mouldings and some carvings of angels.