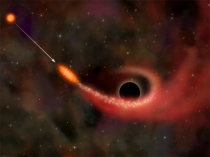 Black holes are the remains of collapsed stars. Stars usually have two opposite balanced forces in them, like a tug-of-war where nothing is moving. These forces are gravity pulling inwards, and the huge energy of the hot gases from the core pushing out. When the core runs out of fuel then the forces become unbalanced and the star collapses. Its gravity is so strong that it even pulls in its own light, leaving a black hole in space!  Nothing can escape a black hole’s gravity – not even light!