Anne Devlin is a very important person in Irish history.

Let's take a look at her story. 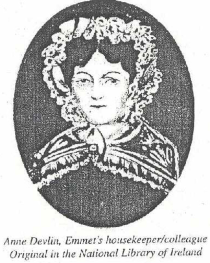 An image of Anne Devlin from an article entitled

An image of Anne Devlin from an article entitled

Anne Devlin was born in Cronebeg, a townland east of Aughrim, Co. Wicklow, in 1778. She was the second eldest of seven children. The famous Wicklow rebels of 1798, Michael Dwyer and Hugh Vesty Byrne, were related to the Devlins.

The Devlins left Cronebeg and moved to Corballis, a mile south of Rathdrum, some years after Anne was born. They farmed a rented 30 acre farm and their landlord was a Mr Thomas Darby.

Mr Darby's sister, Miss Leonard, became very fond of the young Anne. After Miss Leonard married Lieutenant Hempenstall, a man hated by the locals and known as 'the Human Scaffold', she obtained permission from the Devlins for Anne to join her at her new home at Inchicore in Dublin in 1797.

After a few months, Anne's father decided to take her home. It is thought by some that he was actually a United Irishman and knew that the 1798 rebellion was about to take place.

After the rebellion, Anne's father was arrested and put in a Wicklow jail. During this time, the Devlins were often raided because the authorities knew about their famous rebel cousins. When her father got out of prison, the family moved to Rathfarnham in Co. Dublin.