Rawson: Statistical Survey of the County of Kildare 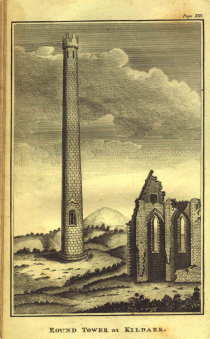 Round Tower at Kildare, taken from The Statistical Survey of the County Kildare, 1807

Round Tower at Kildare, taken from The Statistical Survey of the County Kildare, 1807

A Statistical Survey of the County of Kildare by Thomas James Rawson was published in 1807 on behalf of the Dublin Society later known as the Royal Dublin Society. The survey systematically covers all aspects of the region especially its agriculture, economy, antiquities, history, society and geography. It was written immediately after the 1798 rebellion, the Act of Union 1800 and in the midst of the Napoleonic Wars when Ireland 's agricultural produce was in great demand. Rawson records observations that give a fascinating snapshot of the region at the beginning of the 19th century and puts forward his own suggestions for the improvement of the County Kildare economy.

County Kildare was created following the Norman invasion of the late 12th century. The territory had been traditional domain of the Gaelic Irish MacKelly clan and passed to the Norman FitzGerald, FitzHenry and Keating families. The wealthy powerful landowning Fitzgerald dynasty would survive until the 19th century. While many of the Irish estates were characterised by absentee landlords who spent their wealthy in Britain , the Fitzgeralds were noted for reinvesting their wealth in Ireland .

During the industrial revolution in the 18th and 19th centuries, the town of Prosperous was known for its cotton mills, agricultural instruments were manufactured in Loughlinstown, distilling began in Monasterevin and the brewery Arthur Guinness had an operation in Leixlip. In the late 18th century the construction of Royal Canal and the Grand Canal began and both artificial waterways passed through County Kildare linking Dublin city with the River Shannon. Ireland experienced an economic decline from 1800 onward following the Act of Union and the end of the Napoleonic wars.

The Bog Allen, a vast raised peat bog was then and remains an important source of fuel. Kildare also has some of the best cultivated agricultural land in Ireland . Cereal crops such as wheat, grain, barley and oats were grown while the area known as the Curragh had vast flocks of sheep. Horse breeding, racing and hunting was an important activity among the Anglo-Irish Protestant gentry who lived in magnificent country mansions.

The mostly Gaelic Irish Catholic population like their counterparts in the rest of the country were tenant farmers. They lived in thatched cabins and survived on a diet of potatoes, oatmeal, milk and butter and were often wretchedly poor. Unlike much of the Gaelic speaking west of Ireland , English was the dominant language among the lower classes. They paid high rents, paid tithes to the Anglican Church and were in constant danger of eviction, famine and disease.

The conditions of the poor described by Rawson set the scene for the Great Irish Famine of the 1840s. Kildare was not as badly hit as other regions of the country but the population decline was nonetheless catastrophic. For instance the town of Castledermot lost more than 50% of its population due to disease and hunger. The population of Kildare would continue to decline well into the 20th century as generations of emigrants left for a new life in America and elsewhere.

In the late 19th century, the Irish Parliamentary Party and the Land League campaigned for land reform. By the turn of 20th century the landed estates of the Fitzgerald family and other aristocratic dynasties were broken up and most of the land in Kildare was now in the hands of their former tenants.

Previous - Comerford: Diocese of Kildare and Leighlin
Next - Kildare: The Earls of Kildare