Kildare: The Earls of Kildare 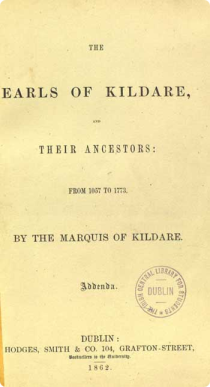 The Earls of Kildare tells the history of the Fitzgerald family dynasty who ruled Kildare from the late 12th century. They were originally a Welsh Norman noble family who arrived in Ireland during and following the Norman invasion in 1169 and soon established themselves as one of the leading and most powerful feudal rulers of Ireland. They were created Earls of Kildare in the 14th century and later Marquess of Kildare and Dukes of Leinster in the 18th century.

A direct ancestor of the FitzGeralds was Dominos Otho Gherardini, an noble from Florence in Tuscany , Italy who was rewarded for his services to King Edward the Confessor of England. His son Walter FitzOtho, was constable of Windsor Castle as was his son Gerald De Windsor also known as Gerald FitzWalter. His son Maurice FitzGerald took part in the Norman invasion of Ireland in 1169 and assisted his half-brother Robert FitzStephen in the siege of Wexford. The 1st Lord of Offaly was his son Gerald FitzMaurice who was the founder of the FitzGerald dynasty. His descendant John FitzThomas FitzGerald was given the title of 1st Earl of Kildare in 1316 by Edward I, Longshanks for his services during the Scottish War of Independence.

In the centuries subsequent to the Norman invasion a number of factors including civil wars, the Black Death,   and a preoccupating with fighting the Crusades led to the weakening of English rule in Ireland . Many of the Norman families had intermarried with the Gaelic Irish and only a small territory around Dublin called the Pale was truly English and therefore trustworthy. As a result Gerald Mór FitzGerald also known as 'Gearóid Mór' or 'The Great Earl' the 8th Earl of Kildare served as Lord Deputy of Ireland from 1477 to 1494 a period during which he was the de facto independent ruler.

Gerald Mór's enemies rose against him, seized power and had him imprisoned in the Tower of London . At his trial in 1496 he convinced Henry VII that he was his ally, to release him and reappoint him as Lord Deputy in order to put down rebellion in Ireland . His heir Gerald Óg, the 9th Earl was also imprisoned in the Tower provoking the 10th Earl, his son Thomas also known as 'Silken Thomas' to rebel against Henry VIII. His rebellion was crushed and he and his uncles were executed in 1537 at Tyburn, London . Thomas' half brother Gerald lived in exile until Henry VIII's death in 1547. His lands were returned to him by Edward VI, the late King's only son. As a reward for his help in the defeat of the Protestant rebel Sir Thomas Wyatt The Younger, the Catholic Queen Mary I, daughter of Henry VIII, restored the title of Earl of Kildare and Baron of Offaly to Gerald FitzGerald.

The 16th and 17th centuries saw the final defeat of the Gaelic Irish and many of the Old English dynasties who continued to adhere to the Catholics religion following the Protestant reformation in England . The Catholic Confederates which included Gaelic Irish and Old English nobles were crushed by the Parliamentarians led by Oliver Cromwell in 1653. In 1690 the supporters of the Catholic James I were defeated at the Battle of the Boyne by William III of Orange .

Thereafter the Protestant Ascendancy controlled Ireland and the Old English dynasties had little option but to convert to Protestantism or be excluded from their titles and their lands. The Fitzgerald dynasty survived in this way and in 1766, John Fitzgerald, 20th Earl of Kildare was elevated to 1st Duke of Leinster.

The rebellious trait of the Fitzgeralds was inherited by the Duke's fifth son, Lord Edward Fitzgerald, who was a leading member of the United Irishmen, a revolutionary movement seeking to establish an Irish Republic and inspired by the American and French revolutions. Lord Edward died of his wounds while resisting his arrest for treason in 1798.

The Act of Union 1800, following the defeat of the United Irishmen in 1798, put an end to the Irish Parliament and the Irish House of Lords. Members of the Fitzgerald dynasty would go on to serve as MPs in the British House of Commons and as peers in the House of Lords at Westminister, London . The Leinster House on Kildare Street , Dublin was sold in 1815 and later became Dáil Eireann following Irish independence in 1922.

The 19th century witnessed Catholic Emancipation in 1829, the Great Irish Potato Famine of the 1840s and agitation by Irish nationalists for land reform and Irish Home Rule. The Fitzgerald estates were sold to their tenants in 1903 overseen by the Land Commission and the family was declared bankrupt. The title of Duke of Leinster is no longer recognized by the Irish state following Irish independence in 1922. Since the death of Francis Needham, 4th Earl of Kilmorey in 1961, no Irish peer has sat in the British House of Lords. In the 2004, Maurice Fitzgerald became the 9th Duke of Leinster and the title is now retained as a nostalgic family tradition.

Previous - Rawson: Statistical Survey of the County of Kildare
Next - Kilkenny