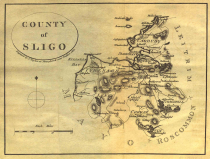 Map of Sligo, taken from McParlan's Statistical Survey of the County of Sligo, 1802.

Map of Sligo, taken from McParlan's Statistical Survey of the County of Sligo, 1802.

A Statistical Survey Of The County of Sligo by James McParlan, a medical doctor, was published in 1802 on behalf of the Dublin Society (later the Royal Dublin Society) as part of series covering the island of Ireland . At the time Ireland had just experienced the bloody 1798 rebellion and the Act of Union 1800. Great Britain and Ireland were in a global struggle with Napoleonic France and the development of Ireland 's agricultural economy was of paramount importance. McParlan's survey covers all aspects of the Sligo economy and society and is a snap shot of the region at the turn of the 19th century.

Sligo or Sligeach meaning 'shelly place' takes its name from the abundant shellfish which live on the coast. Ancient tombs at Carrowmore, monuments and standing stones demonstrate the region was inhabited by a sophisticated people in prehistoric times. A large cairn at the summit of Knocknarea is said to be the grave of the legendary Queen Maeve. The imposing plateau of Ben Bulbin in the Darty Mountains is reputed to have been the home of the Fianna. The Christian era is represented by early monastic ruins on Inishmurray and the medieval ruins at Ballindoon and other sites.

Prior to the 12th century the area was ruled by the Gaelic Irish but after the Norman invasion they became the vassals of the Norman Burke family who eventually adopted Gaelic customs. In the 17th century, British Protestant forces subdued the Irish Catholic aristocrats. By the early 19th century, Sligo was controlled by an Anglo-Irish Protestant gentry such as John Browne who became Marquis of Sligo in 1800.The Irish Catholics who worked the estates had been reduced by the penal laws to the status of tenant farmers and landless peasants who survived in wretched poverty on a diet of potatoes.

The penal laws began to be repealed in the late 18th century and Catholic Emancipation was achieved in 1829. However the Great Irish Famine devastated the rural poor in the 1840s with a million dying from starvation and disease depopulating entire regions. During the catastrophe the 3rd Marquis of Sligo, George John Browne, evicted many of his desperate tenants. Tens of thousands fled from the port of Sligo as workhouses were overwhelmed.

In the latter half of the 19th century, the Fenians, the Land League and the Irish Parliamentary Party began a campaign of agrarian agitation which culminated in a series of land reforms that secured the rights of Irish tenant farmers. By the 20th century the Anglo-Irish landlords had sold up and the majority of Sligo farmers owned their land.