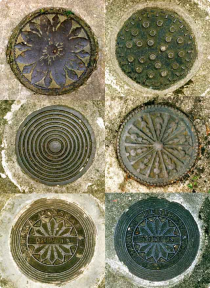 By kind permission of the Rathmines, Ranelagh and Rathgar Historical Society
Enlarge image

The pavements of Dublin's Georgian and Victorian squares and streets contain a unique collection of street furniture. Later, when other European cities were installing modern replacements made of concrete, aluminum and pressed steel, Dublin was forced by economic necessity to retain its beautiful heritage of cast iron.

Coalhole covers are one of the commonest examples of cast iron street furniture. They can be found at the kerbsides of Dublin's Georgian squares or close to the fronts of the Victorian terraces. A coalhole was the delivery point through which coal was poured down to the cellar below.

The cover sits into an iron rim set in the pavement and is locked with a chain attached to an eye inside the lid, and fastened safely from beneath. In fact they are the only ground-holes whose covers can't slip down into them. Generally between 12" and 14" in diameter, they were made small to prevent burglars using them to enter properties.

Most coalhole covers are circular in shape, although Dublin has some attractive hexagonal examples. The patterns on coalhole covers were often moulded rather than hammered out. All originally had a raised pattern to prevent pedestrians from slipping on a shiny surface.

Dublin's Georgian coalhole covers, with their elegant floral motifs, are undoubtedly the most beautiful in the city. Many are badly worn since their original casting date, c.1760-1830, but good examples may be found along the Georgian squares.

All the coalhole covers illustrated come from Mountpleasant Square in Ranelagh, which is a fine example of a Georgian Square.

The late Victorian covers have a wealth of geometric patterns, horizontal or crisscrossed lines, starbursts or concentric circles. Some bear the name of the foundry where they were cast. Casting itself was quite a simple process. A wooden or metal master cover was forced into a box of sand. The master was removed, producing a mould into which the molten iron was poured.