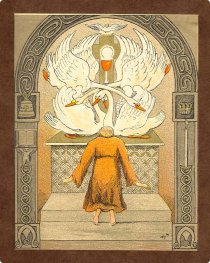 The story of the Children of Lir is one of the best known tales of Ireland. This story tells of Lir and his wife Aobh and their four children called Aodh, Fionnghuala, Fiachra and Conn. Lir's wife died and he married again. His new wife was called Aoife and she became the children's stepmother. At first she loved them dearly but after a time she grew jealous of their father's affection for them.

One day she bore them away and put them under a spell. They were turned into four white swans at Lake Derravarragh in County Westmeath. They remained there for four hundred years. Then they flew away and settled on the Sea of Moyle between Ireland and Scotland, where they stayed for three hundred years in cold and misery. From there they spent three years in Erris, County Mayo where they endured even further sorrow.

At the end of that time they returned to their old home at Sídh Fionnachaidh in County Armagh. Their father was long dead and the place was desolate and empty. They flew off again to Erris and there met the Christian Missionary, St. Mochaomhóg who treated them with great kindness.

At last their period of enchantment came to an end and they were turned into three withered old men and an old woman. The saint baptised them and they died peacefully. They were buried together.

The story of the Children of Lir is based on a legend which reached Ireland from Britain or from France at the end of the Middle Ages. This legend also has parallels with the story of Mad Sweeney as outlined in the discussion on themes in this module.