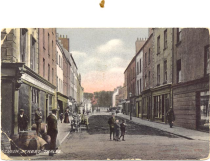 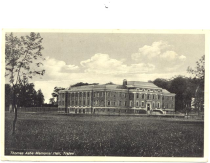 Just four years after the death of Thomas Ashe Ireland achieved its independence from Great Britain.A native government replaced a British administration which had ruled the country for over 700 years.

The role of Thomas Ashe was not forgotten.His native county commemorated him by renaming Nelson Street in the capital town, Tralee in his honour and in 1928 when the impressive new headquarters of Kerry County Council was completed in 1928 it was called the Ashe Memorial Hall.

Dingle Library incorporates the Thomas Ashe Memorial which contains a variety of books, pamphlets and material objects relating to the life of the patriot.

In 1967, on the fiftieth anniversary of the death of Thomas Ashe, Éamon de Valera, President of Ireland, visited Dingle Library. On that occasion the President presented to the Ashe collection a number of armlets worn at his funeral and the nurse's report sheet on the night Tomas Ashe died in the Mater Hospital.

Other exhibits were presented by relatives and friends. These include his Sam Brown belt, ceremonial sword, cap and uniform and the kit that he wore as a member of the Black Raven Pipe Band. Letters written by him from jail and documents relating to him are also a feature of the collection. A poignant remainder of his final ordeal is a crumb of bread from the portion which was forcibly fed to him before his death.

The Centenary of the birth of Thomas Ashe was celebrated in 1985. Among the activities were various tree planting ceremonies, the launching of a Thomas Ashe postage stamp, radio programmes and newspaper articles. Kerry County Library mounted an exhibition in Dingle Library and organised an essay competition in co-operation with Glór na nGael and Conradh na Gaeilge. Kerry County Council jointly published , with Coiste Cuimhneacháin Thomás Ághas, a special Centenary booklet on the patriot. The book, compiled by local schoolteacher Micheál Ó Móráin, was launched at a ceremony at Dingle Library in July 1985.

Irish President Eamon De Valera attending an Ashe commemoration event in Dingle in 1967,the fiftieth anniversary of his death.

The centenary of Thomas Ashe was celebrated in Lispole, Co. Kerry in July 1985.Nobel Peace prizewinner Sean Mac Bride unveiled a plaque to his memory. The photograph shows a local band performing in the background with the plaque waiting to be unveiled.

A tree planting in Lispole ,Co. Kerry to commemorate the centenary of Ashe's birth in 1985.

Many of Thomas Ashe's family assembled in the Ashe Memorial Hall,Tralee in June 1985 to launch a commemorative stamp. The photograph shows a number of Ashe's relatives as well as then Deputy Prime Minister Dick Spring, a native of Kerry.

Some of the original items belonging to the freedom fighter Thomas Ashe, which are on disply in the Thomas Ashr Museum which is located in Dingle Library, Co. Kerry.

Dingle library incorporates the Thomas Ashe Museum which contains a variety of books, pamphlets and material objects relating to the life of the patriot. In 1967,on the 50th anniversary of his death,Eamon De Valera,President of Ireland,visited Dingle Libraryand presented to the Ashe collection a number of armlets worn at his funeral and the nurse's report sheet on the night Thomas Ashe died in the Mater Hospital, Dublin.

Previous - Visit to Ireland 1968
Next - Sources and Acknowledgements