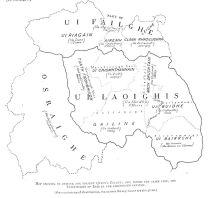 In the tranquil days of the early-Christian era, Laois was a haven of piety and sanctity, and the silent ruins which today are scattered throughout the county act as gentle, but poignant, reminders of the monastic era which originally shaped our Christian heritage. The sept or seven-fold system seems to have been a peculiarity of Gaelic civil life interwoven with ecclesiastical divisions and custom. An old common saying was "he (she or it) is the talk of the seven parishes." The 'Seven Laoises' was a loose description of both land divisions and clan/sept divisions and the following names were generally recognised as the Seven Septs of Laois: O'Devoy (O'Deevy), O'Doran, O'Dowling, McEvoy, O'Kelly, O'Lalor and O'Moore.

These Seven Septs of Laois are central to the county's deep heritage and their transplantation from Laois is a crucial aspect of Laois' history.

On the 3rd May 1601, Sir George Carew, President of Munster, wrote to the Privy Council that Patrick Crosbie had been employed in Her Majesty's service for close to twenty years, and during which time "he had proved himself an honest and faithful subject." In reward for these services he was granted lands in Laois and an extensive territory in North Kerry-lands that had been forfeited by the Fitzmaurices, the Stacks, the MacElligotts and the Cantillons for complicity in the Desmond rebellion. His most important service to the Goverment was the carrying out of the transplantation to Munster of the Seven Septs of Laois. For this purpose he was promised a grant of the district around Tarbert on which to plant close to three hundred members of the leading families of the Seven Laois Septs. In this way the English Government hoped to effect the pacification of Laois which was the scene of continual warfare since planters were first settled there in 1549.

When, on the 17th August 1600, the famous Owny MacRory Óg O'More (O'Moore), Chief of Laois, fell sword in hand, the cause of the Septs was shattered, and, says the Four Masters, "Laois was seized by the English, and they proceeded to repair their mansions of lime and stone, and to settle in the old seats of the race of Conall Cearnach, to whom Laois was the hereditary principality, for there was no heir worthy of it like Owny to defend it against them." Thus it was that the Government thought this would be a good opportunity, before the Septs recovered from their overthrow, to transplant their leading families to Munster or Connaught; for as long as an O'More was in Laois there would be trouble there for the planters.

In recognition of the important place which the Seven Septs hold in county Laois' past, a brief insight into the histories of each of the surnames of the seven families is presented.