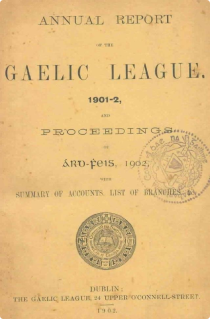 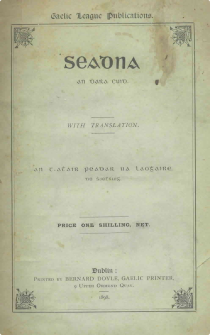 Aged original cover of 'Seadna' with title in bold print, author, price and publisher, surrounded by a decorative border

Aged original cover of 'Seadna' with title in bold print, author, price and publisher, surrounded by a decorative border

Public Domain
Enlarge image
When the Gaelic League set to work at the end of the nineteenth century, one of the main objectives it set itself was the establishment of a modern literature. This was no small task. At that time Irish lacked any standardised orthography or grammar and most native speakers, while rich in oral tradition and in the verbal arts, were illiterate in their own language. Irish also lacked those modern literary forms that had been developed in other European languages since the eighteenth century. The first fully successful modern Irish prose work is Séadna, a retelling of the folk version of Faust by one of the major figures in the Revival movement, An tAthair Peadar Ó Laoghaire. It proved hugely successful, mainly because of the beauty and simplicity of its language.
The Gaelic League had set itself to provide materials for learners and to establish the basis for a contemporary indigenous literature. That they managed to achieve both these disparate aims was due to the presence of highly talented creative writers in their midst. Foremost among them were Patrick Pearse, who wrote both poetry and short stories, and Pádraic Ó Conaire. As well as short stories in the European mode, Ó Conaire wrote one novel, Deoraíocht, an experimental, almost surreal piece set in London and as far removed from the folk narrative as was possible. Two other writers of note were the brothers Seosamh Mac Grianna, who developed a modernist idiosyncratic style, and Séamas Ó Grianna,who was a traditionalist.

Irish also began to develop a drama tradition. The first play in Irish was Casadh an tSúgáin (The Twisting of the Rope) written by Douglas Hyde and performed in Dublin's Gaiety Theatre in 1901.

After the foundation of the Irish state, publishing in Irish was officially encouraged and An Gúm, the state publishing house, was founded. They translated many classic works from English and other European languages into Irish.

Many different types of literature were published in Irish throughout the thirties and forties, including genre fiction, short stories, poetry, short plays and most famously perhaps autobiography or memoir. The most famous of these emanate from the Blasket Islands. They include The Islandman by Tomás Ó Criomhthainn, Twenty Years a Growing by Muiris Ó Súilleabháin, and An Old Woman's Reflections by Peig Sayers.

Poetry was perhaps the most successful of literary forms during the post war period. Three poets, in particular made their mark; Máirtín Ó Direáin, Seán Ó Ríordáin and Máire Mhac an tSaoi. Ó Ríordáin was the most fully European of the three.

By far the most important prose writer of the post war period was Máirtín Ó Cadhain. He wrote of his native Connemara with the unswervingly critical eye of an artist. His work serves as a corrective to the highly romanticised version of the West of Ireland being purveyed at the time in official propaganda. Ó Cadhain's masterpiece is his prose work Cré na Cille, set in a graveyard. It is a tour de force of incredible linguistic energy and power. 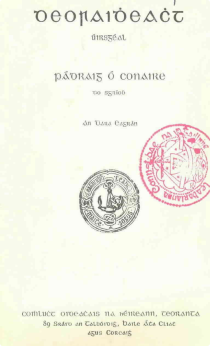 Contemporary Irish literature continues to be vibrant. There is a flourishing publishing industry with new titles appearing in every conceivable genre. Due to the availability of their work in translation Irish language writers enjoy a greater level of visibility and recognition both nationally and increasingly internationally.

Poetry is probably the most developed form of literature in Irish and certainly the most visible. In the 1970's a new generation of Irish language poets burst on to the scene where they have remained since with a few notable additions to their number. They are often referred to as the Innti poets after a poetry magazine of that name. Prominent among them are Nuala Ní Dhomhnaill, Micheal Davitt, Liam Ó Muirthile and Gabriel Rosenstock. The Donegal poet Cathal Ó Searcaigh also belongs to this generation. Other poets of note include Louis de Paor, Biddy Jenkinson, Aine Ní Ghlinn and Belfast poet, Gearóid Mac Lochlainn. Ní Dhomhnaill is perhaps the most recognised poet of her generation with her work widely translated and anthologised.

Previous - The Irish Language Today
Back to