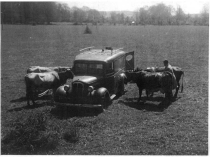 Photo of the mobile milking machine in a field at Corkagh Estate.

Photo of the mobile milking machine in a field at Corkagh Estate.

At Corkagh Farm, cows were milked into vans out in the fields, and milk was supplied to clients in Clondalkin and further afield. The milking machine took over from the time-consuming system of hand-milking that had previously been a feature of dairy work in Corkagh. 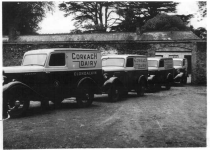 Dairy farming became big business at Corkagh. With mechanisation, the numbers of cattle increased. Four men worked in the dairy and more were engaged in milk distribution, with up to five delivery vans. This photo shows the vans leaving the dairy full of milk for delivery. 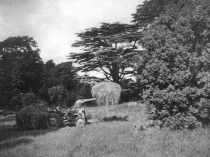 Photo of a man on a tractor saving the hay in a field on Corkagh Estate.

Photo of a man on a tractor saving the hay in a field on Corkagh Estate.

Hay was also harvested every year at Corkagh, and extra help had to be found during this busy time. Local labourers came with threshing machines and two-pronged forks to gather and bail the hay. The Colley family always made sure that the workers were well looked after, with a full meal at lunch time and tea at breaks.