The Constitution of Ireland was voted in the by Irish people and passed in 1937. In the Irish language it is known as 'Bunreacht na h╔ireann’ which means ‘Basic Law of Ireland’.ĀIt is a detailed legal document which declares Ireland (╔ire) as a sovereign state and sets out to embody characteristics of a republic. The Constitution comprises of fifty Articles which are divided into two categories. 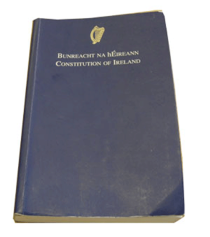 The main institutions of the State

This outlines the role of government and how it is organised.ĀIt defines the function of the President and their authority. It also establishes the court system and its powers.

The Fundamental Rights of the citizens

The Constitution sets out that it is the right of the Irish people to govern themselves and establish their own laws. The law established by the Constitution cannot be changed unless there is a constitutional referendum in which majority rules, only then can the constitutional change be enacted. Every Irish citizen over the age of eighteen is entitled to vote in a referendum.