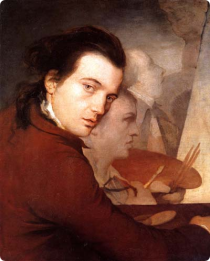 James Barry was one of the most influential figures in Irish and British art during the late eighteenth and early nineteenth centuries. He was a great history painter, a print-maker, and essayist. He was appointed Professor of Painting at the Royal Academy in 1782. He was born at Water Lane in the Blackpool district of Cork in 1741. He was a protégé of the statesman, Edmund Burke, and a firm sympathiser with the movement for American Independence. In his youth he studied classical antiquity and history painting in Bologna and Rome, only returning to London in 1771 where he became a member of the newly-created Royal Academy.

Barry was a great individualist who believed completely in the vocation of painting, particularly history painting. Instead of settling for an easy life of making society portraits, he chose the lonely and unrewarding path of truly fine art, and of history painting in the great European tradition. He lived a life of wretched poverty and deprivation, growing increasingly isolated and paranoid in later years. He fought with his friends and enemies with equal vigour and, up to recently, he was the only artist ever expelled from the Royal Academy.

Although he painted beautiful self-portraits and individual history paintings in the Classical tradition, such as Christopher Nugent (1772), Edmund Burke (1774), Barry as Timanthes (1786) and Ulysses and his companions escaping from Polyphemus (1776), his fame rests firmly on the prodigious series of wall painting he executed for the Great Room of the Royal Society of Arts in London. He spent nearly six years working on these six huge works on canvas. They existed for Barry and his contemporaries as a profound allegory on the progress of human knowledge and Hellenic civilisation.

Barry was also a very important theorist of Art. His letters from the Continent are full of the most brilliant perceptions on the meaning of art, especially Classical art and the Italian Masters. His book An Inquiry into the Real and imaginary Obstructions to the Acquisition of the Arts in England (1775) is a powerful defence of the British artistic imagination while The Works of James Barry (ed. E. Fryer, 2 vols., 1809) contain the lectures, correspondence and opinion that challenge the reader to seek after greatness. Although he may have fought with everyone in the British arts establishment, in 1806 Barry's body lay in state in the Great Room of the Royal Society of Arts and he was buried beside Sir Joshua Reynolds in the crypt of St Paul's Cathedral.

Next - Barry's Boyhood and Early Training