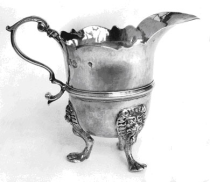 This is an Irish Georgian silver paten donated by John Henry Fitzmaurice, later Lord Shelbourne and eventually the Marquis of Lansdowne to the chapel of Dublin Foundling Hospital in 1766. It was made in Dublin by Richard Williams. inscriptions and markings: Silver stamps and maker

This is an Irish Georgian silver paten donated by John Henry Fitzmaurice, later Lord Shelbourne and eventually the Marquis of Lansdowne to the chapel of Dublin Foundling Hospital in 1766. It was made in Dublin by Richard Williams. inscriptions and markings: Silver stamps and maker

Silver began to take the place of gold from AD 500, shortly after the introduction of Christianity, and was used with a combination of other metals such as gold, copper and bronze. The best-known pieces from this period are the Ardagh Chalice and the Tara Brooch; these may be seen in the National Museum. The term, 'Dublin Silver', is used in connection with a period from 1500 onwards and refers to pieces that were actually manufactured in this city. The Church was the main patron of the craft and very little domestic silver from this time has survived.

It is only with the restoration of the Monarchy in 1660 that it becomes possible to start a serious study of domestic plate. The city began to expand and the demand for domestic silver burgeoned. The desire for silver brought into being a band of skilled silversmiths whose work has never been surpassed. During the eighteenth century, Dublin was, after London, the second city of the British Isles and the designs in silver often followed those of London, with a time lag of a few years. There were three main styles of decoration during this century. From about 1705 to 1740, domestic silver was made of heavy-gauge metal. It was a time of plain surfaces and elegant proportions, the decoration being mostly in the form of crests and coats-of arms.

The florid, highly decorated Rococo period which followed, from 1740 to 1770, saw the flourishing of the chaser's art. It was late to arrive in this city, for it had already established itself in England in the 1730s. To express the Rococo in silver required great skill; Dublin was blessed with outstanding craftsmen who developed their own style of decoration, which differed from its English counterpart. Rocky crags and escallop shells, together with farmyard scenes of cows, sheep and dogs, accompanied by a shepherd and enclosed in large C scrolls, on which perched exotic birds, appeared as ornament on most items of hollowware.

By 1750, a building boom was in progress. New town houses were being built with stucco work on the plaster ceilings incorporating, the same medley of subjects in their ornament. The final vogue of the eighteenth century was for the Adam style of Neoclassicism, from about 1770 to 1800. It was an architectural style that strove to be classically correct, inspired by excavations of Greek temples in Sicily and by decorative frescoes found at Pompeii and Herculaneum. In Dublin silver there is no special version of this classical influence, which was mainly copied from its English counterpart, except perhaps for a certain individuality in swing-handle sugar baskets. It is probably best remembered in Dublin for its beautiful bright-cut engraving, being a linear pattern cut into the surface with a sharp tool, called 'a graver', to capture pools of shimmering light from the movement of flickering candles.

Next - 19th Century to the Present Day