Flora and Fauna of Wexford Sloblands 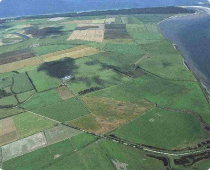 A 1,000-hectare low lying flat polder land situated on the north side of Wexford Harbour was reclaimed from the sea in 1847. A two and a half mile long dyke was built from north of the Raven Point at the entrance of the harbour to the shore at Ardcavan, one and a half miles northeast of Wexford. This dyke enclosed 2,500 acres of mud flats and several islands the most important of which are Begerin Island, Big Island and Middle Island. These islands which comprise about 150 acres of the North Slobland stand out as low ridges in the other wise flat landscape.

The North Slob is roughly semi circular in shape, the sea-dyke forming the east-west diameter. A horseshoe shaped wide and shallow channel runs through the slob, ending abruptly at the sea-dyke near its east and west extremities.

This channel acts as a reservoir for the rainwater draining off the Sloblands and as the water rises in the channel it is pumped into Wexford Harbour via a pump-station on the sea-dyke at the west end of the channel.

Sloblands are below sea level. The reclaimed mudflats were divided up into large fields and kept dry by constant pumping. For about 100 years much of the Sloblands provided rough summer grazing for livestock, although parts were cultivated for cereals and root crops.

Nowadays most of the lands are sown with high quality grasses and winter/spring cereals although on occasions, a variety of other crops have been planted. Water plants and reed beds flourish along the edge of the drainage channels. The slobs are reminiscent of the Dutch polders. This is by its very nature, immensely attractive to wildfowl and waders.

The North Slob in Wexford is internationally famous for its wintering flock of 10,000 Greenland Whitefronted Geese (approximately one third of the world population), and for the wintering flocks of Brent Geese, Bewick's Swans and Wigeon. The North Slob is also very attractive to many other species of wildfowl and birds with almost 250 species now recorded.

There are many excellent vantage points to observe the birds and other fauna on the Wexford Sloblands.

Photograph of a family of Whitefronted geese out for a walk. The photograph shows one adult walking in front of three juveniles the last of which is wearing an indentity collar.