Athenry Environmental Network, County Galway, were one of three highly commended awardees of the Comhar SDC Sustainable Development Award, which is a special award under TidyTowns in 2010. The award recognises communities that are putting Sustainable Development principles into practice.
Athenry Environmental Network are a group of volunteers involved in environmental education and projects in Athenry. The network was established in 2007 to promote environmental awareness, education and projects within Athenry and beyond. The network is voluntarily run with a Chair, Secretary and Treasurer. 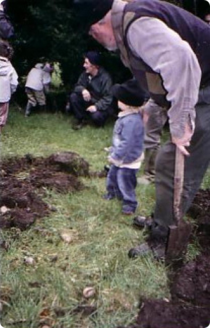 All of the work is done in co-operation with Athenry TidyTowns Group, Athenry Women’s Group, Athenry Community Council, Athenry Brothers of Charity and of course individuals. The group also maintain contact with Galway County Council. This interaction and participation with other groups has strengthened the capacity of the group and has been a source of knowledge.

In 2008, the network set up a community garden project near Athenry to promote the idea of sustainable development through growing food. In 2009, this developed into an allotment project on a different site within the town. The project runs with the co-operation of Athenry Community Council and is open to anyone who is interested.

The network is trying, through the allotments project, to get people to focus on food resources and how they can help the environment by growing their own food and sourcing food locally. The group also organise talks with experts on growing vegetables.

Allotment users are encouraged to rotate crop use so as to maintain the soil from year to year. The allotments are rich in biodiversity. An area has been left wild for wildlife and a bug box is used to encourage ladybirds, which eat greenfly. The gardeners benefit as the wildflowers attract bees which help crop fertilization. Allotment holders avoid the use of chemicals and fertilizers. Horse manure is donated from local farmers to help with crop growth. Seaweed is also used as a manure. 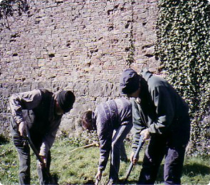 As part of their education programme workshops are held twice a year in spring and autumn. Previous workshop topics include windpower, bees, eco-friendly building and jam making. The group have been involved in a tree planting scheme in the local school grounds and public areas. By 2010, 250 trees were planted. The trees were planted by volunteers of the group and by children from the local schools. Many of the trees were planted in school grounds so the children could keep an eye on the trees as they grow.
In 2010, Patrick Creed won money through an environmental competition run by Marks and Spencers. The network was nominated the recipient of the money. It is going towards 3 bicycle racks in the town; at the church, at the train station and at the local supermarket. The group will also put up signs in the town to tell people how far it is to various points, such as the train station, by bike. 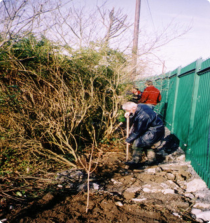 Users of the allotment in Athenry digging earth

Users of the allotment in Athenry digging earth

The network are developing a water collection system and a composting area so that they can further reduce their use of materials and resources, and recycle waste. The composting area will also be open to the Athenry TidyTown group to help them deal with their waste.

The Comhar SDC funding from 2010 will be spent on the composting area of the allotments and on attracting speakers for environmental talks.