Which Pollutants Are Dangerous?

Sulphur Dioxide – high concentrations can result in breathing impairment for asthmatics that are active outdoors. As can be seen from the graph below, levels have been consistently low in Ireland since 2002, with a slight downward trend. This trend is reflective in the shift in fuel choice across Ireland in both the residential heating sector and the energy production sector. This shift has been from sulphur containing bituminous coal to those fuels which are low in SO2 production, such as natural gas (EPA, 2013). 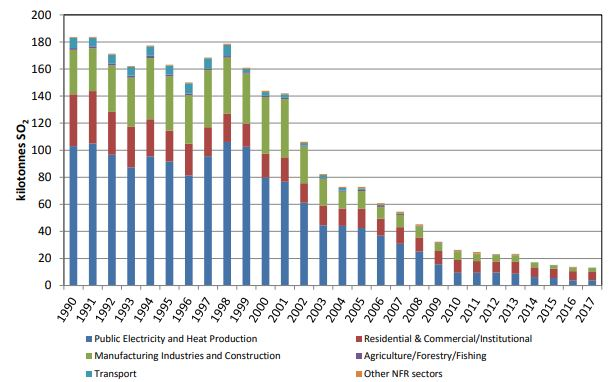 Trends in SO2
Courtesy EPA ©

Ozone at ground level - exposure to this can irritate breathing, decrease lung function, inflame airways and worsen lung conditions such as asthma. It can also affect crops and other vegetation and even buildings.

Lead – Extended exposure may lead to seizures, mental problems and behavioural disorders. At low doses lead exposure is linked to damage of the nervous systems in young children.

Carbon monoxide - CO reduces oxygen in the blood stream, when it enters the body through the lungs. The danger of this pollutant increases in people who suffer cardiovascular diseases such as angina.

Benzene– Long term inhalation can cause disorders in the blood – including reduced red blood cells and anaemia.

Particulate matter  – These particulates are so small that they get deep into your respiratory tract and increase the risk of disorders.

Oxides of Nitrogen – it has a direct effect on health, as short-term exposure reduces lung function while long term exposure is linked to increased risk of respiratory infection in children. NOx levels in urban areas are influenced by weather episodes, which accounts for some of the variation seen in annual results. 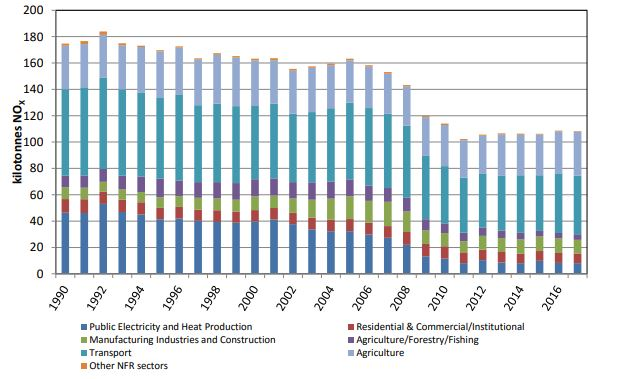 POPs, or Persistent Organic Pollutions, are chemical substances that can have serious effects on health and the environment. Evidence shows that these substances can be transported far across international boundaries, impacting on the environmental and health across the globe. To address this problem, many nations have signed international conventions on POPs.

POPs regulations 2010 prohibit the production, use or placing on the market of POPs and restricts the use of other substances. It also includes provisions for the management of waste consisting of, containing or contaminated by any of these substances.

In Ireland, the management of waste containing POPs is integrated into the EPA’s waste licensing and permitting systems.

Volatile Organic Compounds (VOCs) are air pollutants that are harmful to the environment and can also affect human health. They can contribute to respiratory illnesses, and some can cause reproduction problems and be harmful to the unborn. Vehicle emissions, commercial and industrial activities using organic solvents, pharmaceutical manufacturing and dry cleaning are some of the sources of VOCs.

On an EU level, the emissions of VOCs are addressed by the Directive on National Emission Ceilings.

Ammonia (NH3) is an odourless gas that comes from the breakdown of Nitrogen. Nitrogen is a key input in farms through fertilisers and animal feedstuffs. Approxiamtely 80% of Nitrogen can be lost as ammonia in the air. This is an air pollutant that has adverse effects on human health and the environment and can cause eutrophication of surface waters, loss of biodiversity, soil acidification. It is a precursor of secondary find particles in the air, significantly reducing air quality. This can have long-term effects on the cardiovascular system and 20 respiratory system when inhaled.

99% of ammonia emissions are sourced from agricultural practices in Ireland through manure application, animal feeding etc. Animal manure accounts for 90% of ammonia based emissions with chemical fertilisers and road transport accounting for the remainder. For example, grasslands in Ireland receive the bulk of the 40 million tonnes 8 (Mt) of animal manures produced during housing annually along with approximately 300,000 to 400,000 tonnes of nitrogen in fertilisers (DAFM, 2019)

The figures from the EPAs Ireland’s Transboundary Gas Emissions report 1990-2030 show that ammonia emissions ( one of Ireland's five main air pollutants) increased in 2016 - 2017, resulting in the exceedance of Ireland's emission ceiling for that time. Emissions were 8.7 kt or 7.9 per cent higher in 2017 than in the year 1990. These latest estimates show non-compliance for the ammonia ceiling in Ireland with regards to its 2020 and 2030 emission reduction targets, with an estimated gap of 20 kilotons by 2030. The most recent EPA provisional report on Ireland's Greenhouse Gas Emissions confirms that nitrogen fertiliser use also increased by 10.7% in 2018. This suggests that the adoption of abatement technologies and drastic improvements in farm level nutrient management is now required.

For information of the Code of Good practice for reducing ammonia emissions please click here.

Previous - Air Pollution Act 1987
Next - Where Do They Come From?