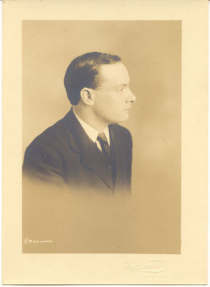 Padraig Pearse was a teacher, poet, writer, nationalist and political activist. He was one of the main leaders of the Easter Rising in 1916. This photograph was taken in New York in 1914.

Padraig Pearse was a teacher, poet, writer, nationalist and political activist. He was one of the main leaders of the Easter Rising in 1916. This photograph was taken in New York in 1914.

Patrick (Pįdraig) Pearse (1879-1916) was born in Dublin and had a great interest in the Irish language and spent many summers in Rosmuc in Galway learning Irish. At first he just wanted a parliament in Dublin rather than total independence from Britain. However, he later decided to start a rebellion and fight for independence. He established a school for boys, St. Enda’s School, where children could learn about Irish culture and language.

During the 1916 Rising, Pearse was in charge of the General Post Office (G.P.O.). When the British army overpowered the Irish rebels, it was Pearse who ordered their general surrender in order to save further loss of life. He was tried and executed by a firing squad in Kilmainham Jail on the 3rd of May 1916. His younger brother Willie was also shot.

In addition to being a teacher and a revolutionary, Patrick Pearse was also a poet and a writer. One of his famous poems is called The Mother. It was written the night before his execution and describes his mother’s thoughts on the death of her two sons.

'The Mother'
By Pįdraig Pearse

I do not grudge them: Lord, I do not grudge My two strong sons that I have seen go out To break their strength and die, they and a few, In bloody protest for a glorious thing, They shall be spoken of among their people, The generations shall remember them, And call them blessed; But I will speak their names to my own heart In the long nights; The little names that were familiar once Round my dead hearth. Lord, thou art hard on mothers: We suffer in their coming and their going; And tho' I grudge them not, I weary, weary Of the long sorrow--And yet I have my joy: My sons were faithful, and they fought.