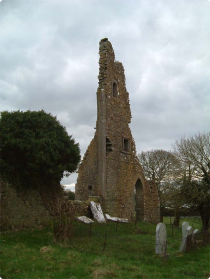 Sham ruins, like here at Killua were popular as part of a romanticising and picturesque garden style.

Sham ruins, like here at Killua were popular as part of a romanticising and picturesque garden style.

Image courtesy of Kevin Mulligan
Enlarge image
Country houses do not stand in isolation. They are part of a designed landscape, known in Ireland as a demesne, which represents the Belline area (usually enclosed by walls) retained with a house for use and enjoyment, over and above the lands of an estate, which were tenanted and formed the main source of income. A foretaste of the architectural qualities within a demesne is often provided by the gate lodges, arranged formally beside, or even as a feature of, grand entrances. Often mirroring the architecture of the house, these range from modest estate workers' houses  to miniature Classical temples  and monumental gate houses

This monumental castellated gatescreen at Duckett's Grove in County Carlow is as ambitious as the castle it was built to serve.

. Most features within a demesne, regardless of function, received architectural attention and could be highly ornamental, whether a stable yard, cart house, dairy, walled garden

The walled garden clock tower in Marlay Park in Dublin

This curious monument at Waterston in Co. Westmeath was designed by Richard Castle as a dovecote and placed within a designed landscape to serve as an eye catcher to improve views within the demesne.

The guiding hand of the landlord usually extended outside the demesne to the rest of his estate. This was most evident in the formation of estate villages. The finest of these villages are usually found beside the principal entrance, like those of Glaslough, Slane, Ardagh and Moynalty.

An octagonal gate house, originally one of a pair that announed the entrance to Belline House.

This aerial view over Ballyfin shows how the country house was the centre of a much larger economic unit, supporting its own community and activities in a great variety of buildings; mostly of a functional nature these buildings were often embellished to enhance their visual interest and appeal.

A simple porter's lodge raised above the ordinary with a handsome window set in a shallow arch at Castlehackett in Co. Galway

This rustic lodge at Belline, Co. Kilkenny is built in a primitive way as novelty to enhance the landscape and to reflect the origins of classical architecture.

The wilful asymmetrical arrangment of the building at Duckett's Grove in County Carlow contributes to the romantic, picturesque qualities.

Ballyfin, County Laois Inside these bounded landscapes that Elizabeth Bowen called 'house islands' is an enclosed world, where the house is presented in a landscaped park according to the predominant fashion. Natural characteristics of the topography were enhanced and ornamental buildings added to give scenic and aesthetic interest. The steady supply of cheap labour fuelled the creative ambitions of landlords. These ambitions were frequently expressed in architecture, so that many demesnes were embellished by a series of rustic and formal garden buildings. Usually inadequately termed as follies, they range from the whimsical and curious to the extraordinary, and represent the most diverse buildings of the eighteenth and nineteenth centuries. They include bridges, gazebos, temples, towers , obelisks , sham ruins, grottoes  and shell houses. Some of the finest examples can be seen in the demesnes of Tollymore Park, Rockingham, Killua and Belvedere.

This obelisk at Killua, Co. Westmeath was erected to commemorate Sir Walter Raleigh.

Primitive structures such as this at Hermitage in Dublin were built in extroardinary and bizarre materials, usually with river worn and conglomerate stones so as to invoke an imaginary and grotesque world associated with primitive society.

This massive fortified tower at Ballyfin in County Laois was built by Sir Charles Coote as a famine relief projects and served as an ornamental eyecather, a viewing tower and tea house.

The Gothic gazebo or viewing tower at Belvedere is one of many ornamental garden buildings or 'follies' built for pleasure and entertainment.

The Temple of the Winds in Mountstewart is a highly sophistciated garden building, which like the Casino at Marino in Dublin, reflected the cultured tastes of the patron.