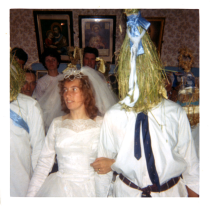 A bride with a 'Straw Boy'

A bride dancing with a 'Straw Boy' at her wedding

A bride with a 'Straw Boy'

A bride dancing with a 'Straw Boy' at her wedding

A number of traditions surrounded the wedding day itself. The bride’s family provided the feast that followed the wedding. Beggars came for a free meal or a drink, and were seldom refused. In some places, money was thrown at the crowd – easy for rich farmers or shopkeepers, but a big expense for those who could ill afford it.

One custom undergoing a revival today is the tradition of strawboys visiting the wedding. Strawboys, who were groups of revellers disguised in straw costume and wearing conical straw hats over their faces, have traditionally visited weddings to dance with the bride and other women, entertained with music, songs and jokes. Their presence was believed to bring luck, wealth and health to the newlyweds. 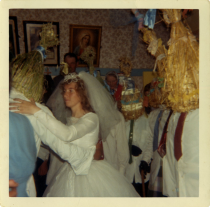 'Straw Boys' at a wedding

Old Irish tradition of 'Straw Boys' at a wedding

'Straw Boys' at a wedding

Old Irish tradition of 'Straw Boys' at a wedding

Closely related is the tradition of the mummers play, a ritualistic folk drama with a varied cast of characters that is acted out throughout Europe, and can still be found in large parts of Ireland, including Wexford, Galway, and several border regions. Today, the Aughakillymaude Mummers, based in Fermanagh, Northern Ireland, will perform at weddings across Northern Ireland and, as with all mummers dressed in straw costumes or other costumes, act out a series of theatrical rituals. The straw may be connected with and symbolic of pagan fertility rites, and the central theme of the play involves a battle between the forces of good and evil.

The mummer’s folk drama includes a scene where a cake of bread is broken over the heads of a newly married couple, while in olden times, a cake of bread, usually a thin, crumbly oat cake, was flaked over the couple’s head to signify luck, happiness and fertility.

Another related custom is the St. Stephen’s Day 'Wren Boy' tradition. Over a century ago, crowds of boys hunted a wren, put it on top of a decorated pole and, dressed in colourful clothing, masks and straw suits, paraded it through the town to the accompaniment of céilí music. In more recent times, a fake wren is used, and girls and adults join the procession.

Getting married was everything, especially for girls. Despite a relative lack of choice as to who she may marry, girls and young women were keen to foretell who they would marry in the future. Wedding cake under the pillow was said to induce dreams of a future husband.

Weddings, perhaps more than any other custom, are still loaded with tradition. Whether secular, religious or spiritual, tradition is very much present in the planning of the wedding, or notable by its absence. Amongst the contemporary wedding traditions, civil or religious, many men in Ireland will still ask his future father-in-law’s permission before proposing, it’s still considered bad luck for the man to see his bride’s dress before the big day, the bride and groom usually exchange rings, and have bridesmaids and best men. There are almost always speeches, music and dancing at the heart of the reception, and a meal for the guests.

Previous - Marriage
Next - Example of a Civil Ceremony